Sony was initially intending to shutdown Gravity Rush 2‘s servers in the beginning of 2018, but it now appears that Gravity Rush 2 servers are staying online for extended time.

Back in September 2017, Sony announced they would be shutting down Gravity Rush 2 online functionality on January 18, 2018. It now appears as though Sony is extending the server shutdown to July 18 according to Reddit User Hartia. The new shutdown date, according to a screen capture from Hartia, is now July 18 at 10pm PT (July 19 at 1am ET/6am UK/4pm AET). See the capture below. 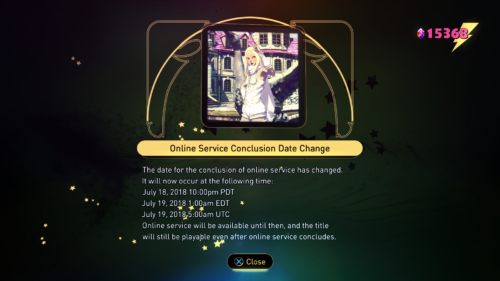 When Gravity Rush 2‘s servers do get shutdown, players will lose access to game features such as:

Thoughts on Gravity Rush 2 servers staying up? Let me know in The Pit below.