It seems like everyday, Amazon is adding some new feature to its wildly popular Prime service and today is no different. Twitch Prime (which is an Amazon Prime tie) will begin to deliver free games monthly to the streaming platforms Twitch Prime members. This new initiative is called Free Games with Prime and will feature a monthly collection of PC titles for free. 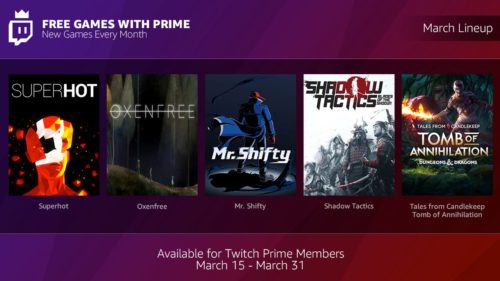 Eight of these free games were featured during the Twitch Prime Indie Amplifier event Amazon held, which involved streams of indie games and fans voting on the victors. The winners of the event were Shadow Tactics and Candlekeep: Tomb of Annihilation.

All titles in Free Games with Prime will be shown off on Twitch. Streamers ElegyofGames and seriouslyclara will be running streams through July on their streams Sundays at 6PM PT and Mondays at 8:30PM PT starting on 3/25 and 3/26 respectively.

Thoughts on the Free Games with Prime for March and April? Let me know in The Pit below.