Looking for that competitive edge? Understanding the art of the Fractured Space implant will play a critical role in helping you flesh out your gameplay style. I have spent some time tweaking my loadouts, and continue to change my implants as I learn more. Luckily the game has given some great information to understand how each implant works. A couple months ago the info was non-existent and my implant loadout was brutal. So get ready to learn.

Get your old folks reading glasses on to read this, or just check it out below

Above is the screenshot from the game detailing their descriptions for each implant. I have typed them out below for readability. To bring up the Fractured Space implant info box in game, click the question mark “?” beside the “Get More Implants” button on the crew tab. If you see grammatical errors below, just know that I saw them too, but thought I should copy what the game has said verbatim. Even though some of the grammar sucks . . .

Attack Damage: Increases the damage output of all weapons.

Missile Range: Increases the range of your missile system.

Ramming Damage: Increases the amount of damage you inflict when ramming another ship and reduces the amount you receive.

Armor Repair: Decrease the amount of time it takes for your ships armor to replenish outside of combat.

Armor Strength: Increases the amount of damage armor can take before breaking.

Broken Armor Damage (Reduction): Reduce the amount of damage your ship will take once the armor is broken.

Hull Strength: Increases the hull points of the ship.

Jump Damage Reduction: Reduces the damage you take when taking damage during a jump.

Station Damage Reduction: Reduces the damage you take from the enemy base.

Capture Rate: Decreases the time it takes to capture objectives.

Energy Regen: Increases the rate at which your ship’s energy level regenerates.

Forward Thrust: Increases the ships forward and reverse speeds as well as acceleration.

Jump Prep: Decreases the warm-up time it takes for a ship to jump.

Repair Efficiency: Increases the rate at which forward stations, home bases and support ships can repair your ship.

Sensor Range: Increase the range you can target enemies, squadrons, structures, buoys and other entities.

Squad Cooldown: Decreases the time it takes a ship to relaunch or replace drones, fighters or bombers.

Squad Survival: Increases the survivability of drones, fighters and bombers.

Utility Cooldown: Decreases the cooldown on all abilities but not weapons.

Utility Duration: Increases the duration that effects (like mark target or slow) are applied to targets. 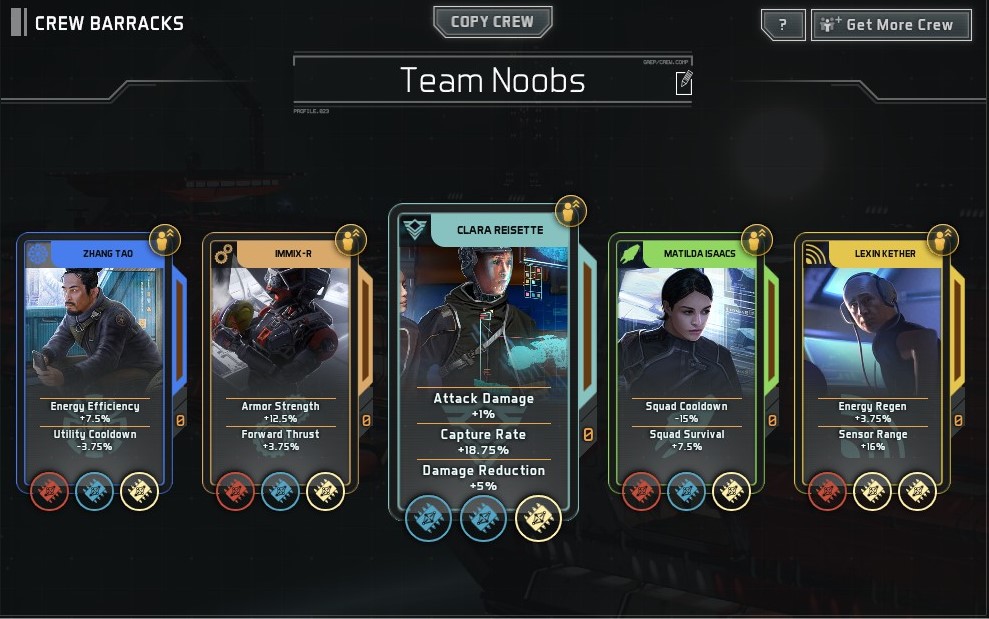 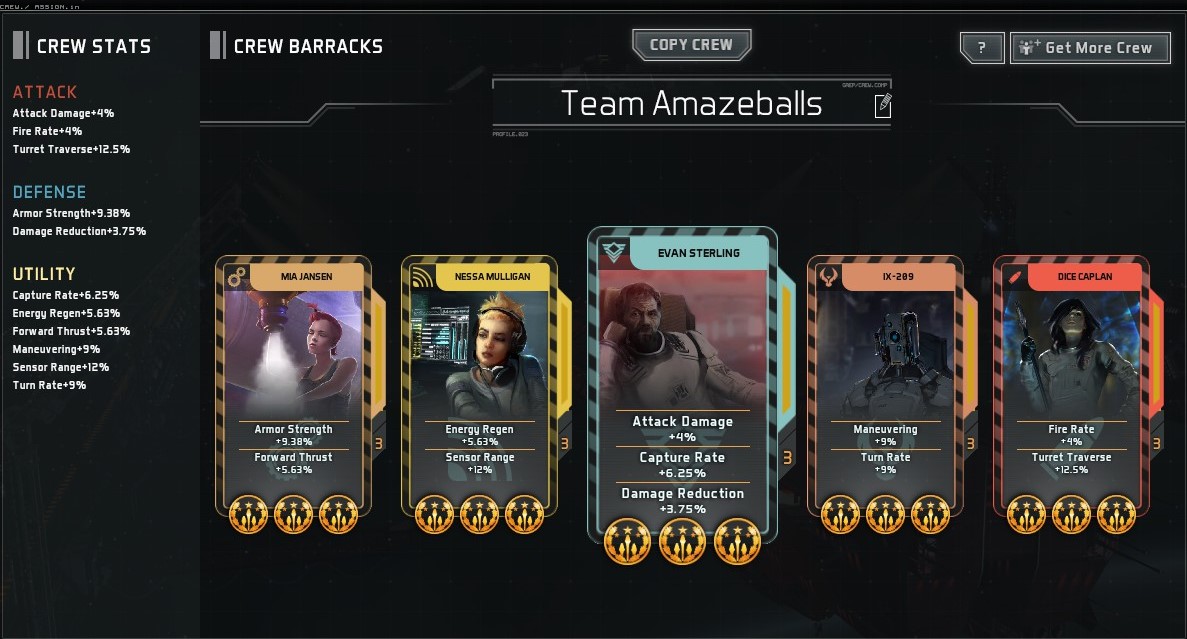 Having a legendary crew member gives a lot of flexibility for build options. You may want to spend your Elite XP to level up your core crew members if you find your build isn’t quite right.

A lot of flexibility is possible with all these implants. You will need to play some games before you understand where your weaknesses are. I have some examples below of my current loadouts. I am in no way saying these are the optimal loadouts, but they work with how I imagine I play. If you have some pointers or hot tips, please dish them out. I always enjoy the chance to win even more.

At the very least you will need three builds, attack ship, heavy ship, healing ship. As you find which ships you excel with, feel free to build more specific builds. Not all attack ships behave the same, and with some tweaking you can get maximum output from every ship type. I haven’t found a limit on how many crew loadouts you can have, but then again I only have 8 loadouts. Building an implant loadout for a ship is easy if your crew is all legendary. 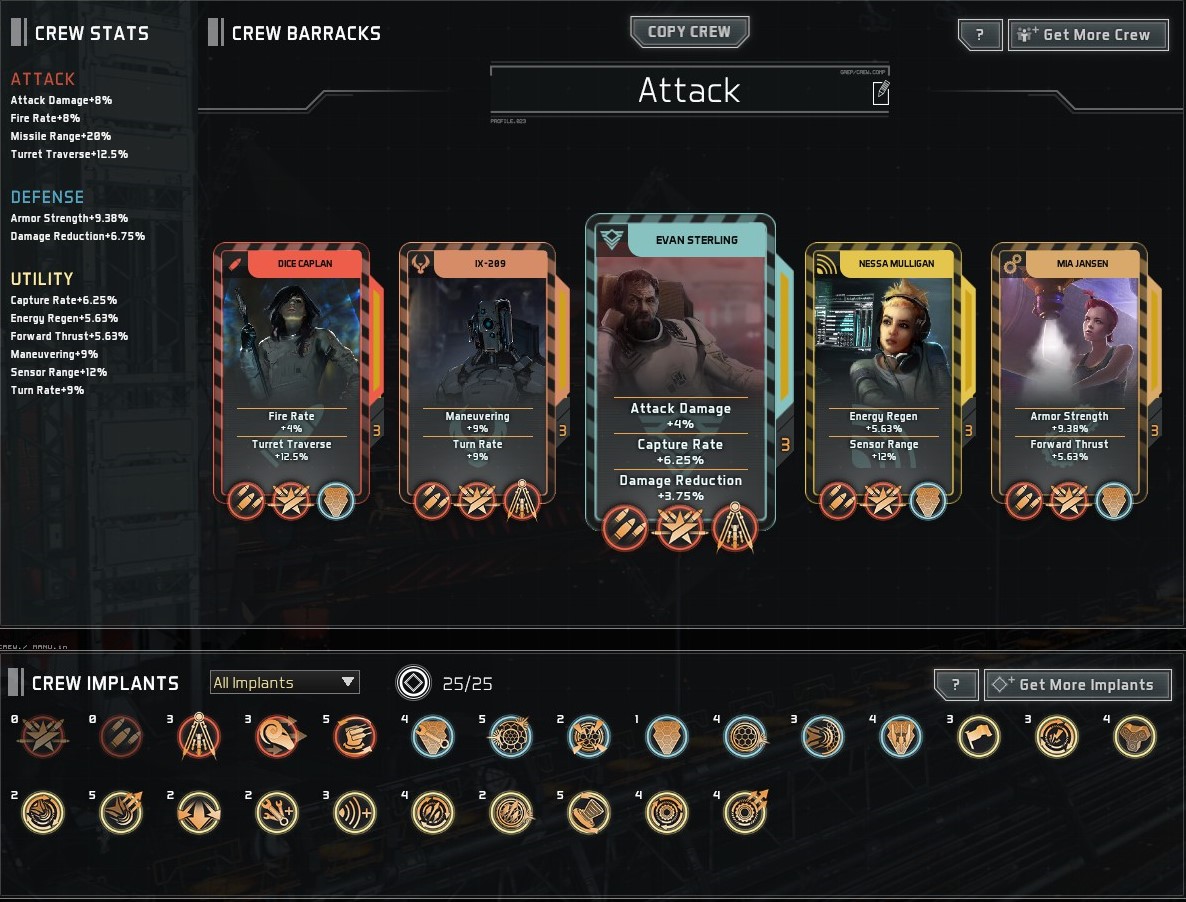 This is my generic attack build. I go for damage output from the main guns and boost my missiles by a bit. Attack ships are typically in close range, so increasing missile range seems only somewhat important to me. I went for three 1% damage reduction implants to sustain me in fights. Never hurts to take less damage, especially when you expect to be in close.

I have more specific builds for sniper ships and for cloaking ships. It’s all up to you. If you are playing with a ship like the Executioner maybe having better forward thrust is best for you. 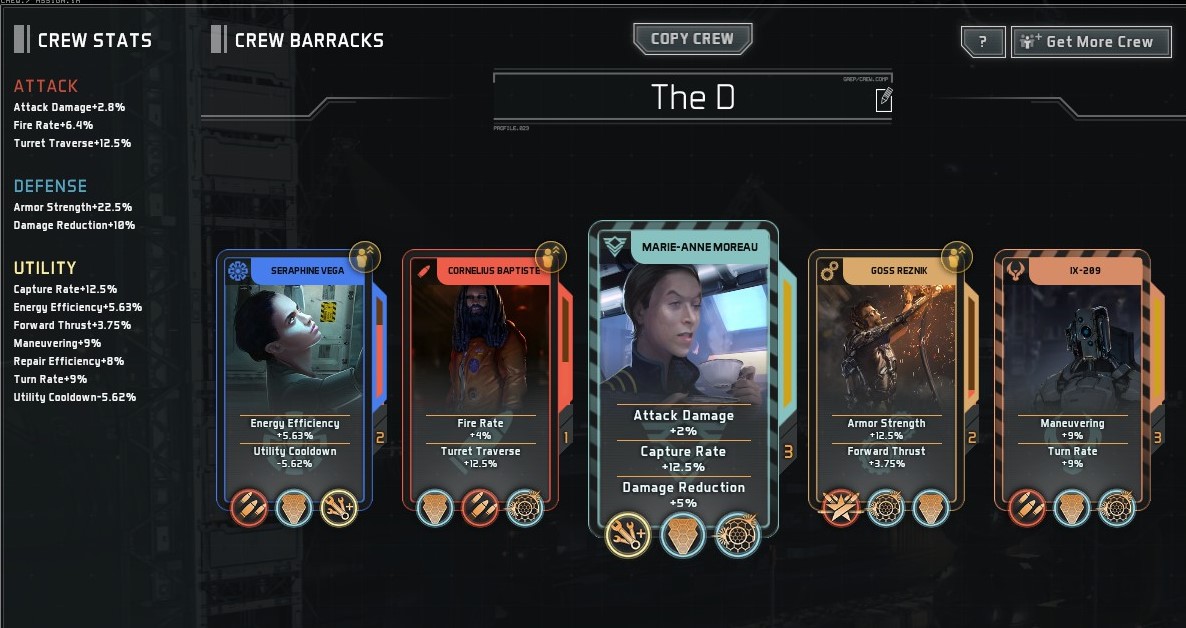 Here I prioritize 2 functions. First I want to reduce incoming damage, I have 4 implants that reduce incoming damage by 1% each. I would have five on my build, but I don’t own five yet. I then increase the armor strength. With 4 of those I increase armor strength by 10% total (2.5% each). This should help me stay alive longer and not let the enemy break my armor, which is important as broken armor gives the enemy a 2x damage bonus against whatever side of your ship has broken armor.

I took a new route (for me personally) with the two healing boosts. This implant increases the healing received by 4%. I am experimenting here, but I think even having one of these hanging around has got to be helpful. If you are the tank you can expect to require a lot of healing. Nothing is more frustrating that a tank that just won’t go down. If anything I should probably put a couple more in here. I will save that for when my MMR is a little higher. Low level healers can sometimes be a little dodgy. 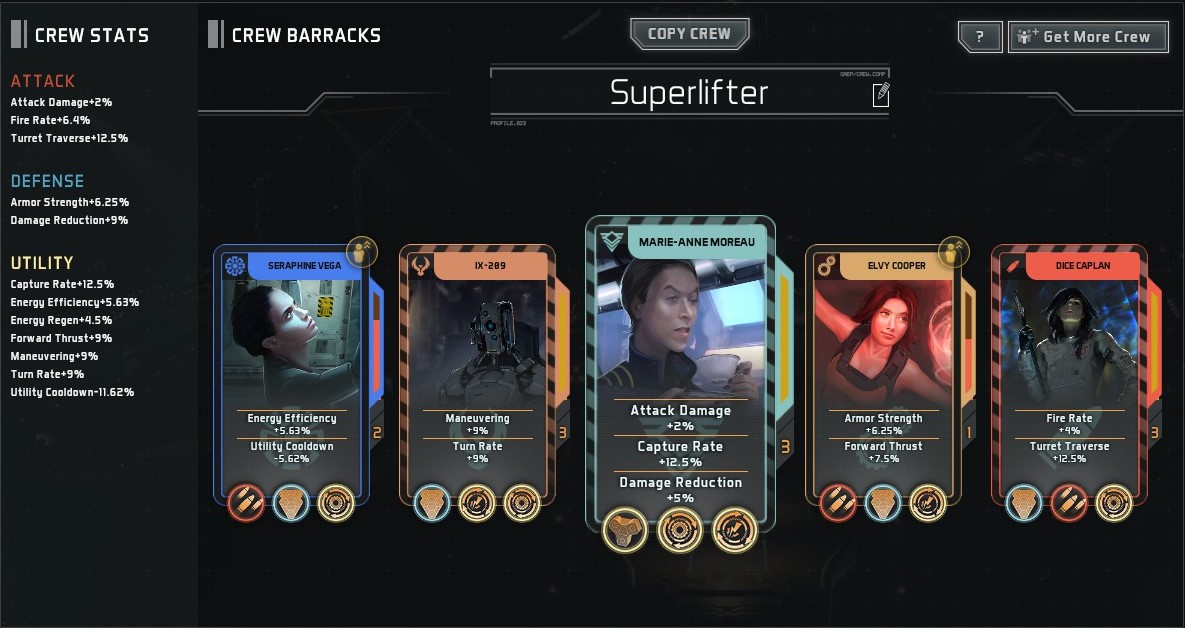 I don’t have a great generic utility build as I prefer to use the Superlifter as my healing ship. It is amazing, but you shouldn’t use the Superlifter because I hate fighting against them. Here I prioritize utility cooldown, allowing me to pop more healing out. I checked around the internet (not the dark nooks and crannies though) to see if the utility duration implant would boost the healing effects from the Superlifter or any other healer. At this time it would appear that no this does not affect healing abilities. I have also built for damage resistance as healers can often be targeted first. A good team has the enemy healer at the top of the kill list. Please for the love of all that is holy, do not try to take down the enemy tank first! I know it is a tempting target, easy to hit and always in front. With a good healer backing that tank up, you will never kill it.

I also put a little fire rate increase to boost the modest damage output of the Superlifter. It seriously is a great all-around ship that is always fun to play. A good choice for other healers is to increase their forward thrust. Since a healer is a prime target, that higher speed will help thwart the enemy designs. I chose to only include one speed boost in my Superlifter build as the Superlifter has drones which increase its speed. Though with more forward thrust implants to boost speed the Superlifter could be zipping around like a Formula 1 car . . . food for thought . . . 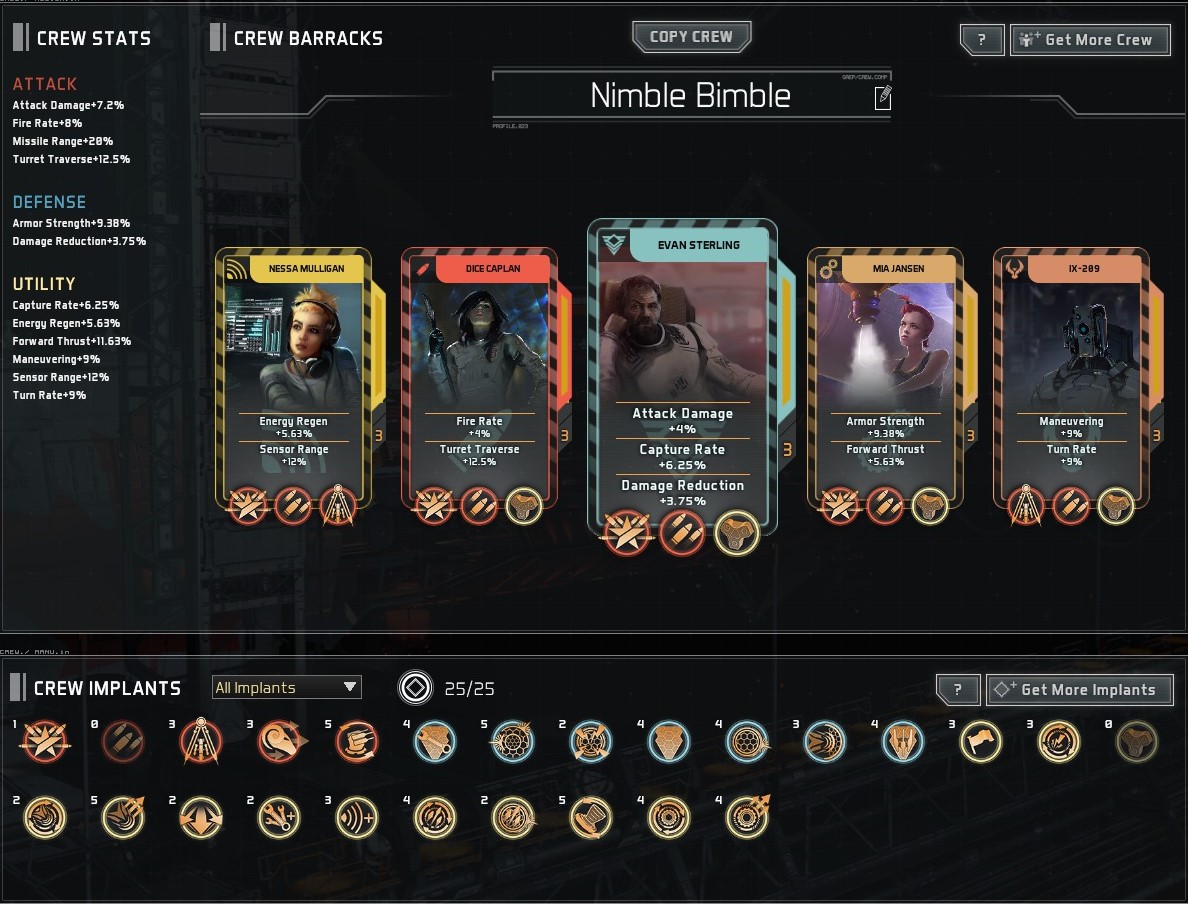 This is my loadout for the Endeavor. I wanted to include this as an example of a very ship specific build. Here I maximize damage by increasing attack damage, fire rate, and a small bump to missile range. What makes this a unique build is my emphasis on speed. The Endeavor has a really weak hull. Once caught alone it is powerless to resist almost any ship. The main guns of the Endeavor are halfway decent, but the ship cannot take any battering. Here speed is essential. Once the turrets are deployed the Endeavor can safely retreat and make everyone miserable from a distance, effortlessly.

You may find that increasing your speed and maneuverability is just as effective and increasing your defensive statistics. If you like to always be in the action, build for more mobility.

Wrap It Up Man

As you can see, in Fractured Space implant usage is flexible, important, and customizable. Be sure to tweak your setup often. With the occasional long matchmaking load time there is always time to consider how to have a better loadout for your next match.

If you have any questions or comments, hit me up below. I always enjoy some insight. I know there are some amazing players out there with mountains of information. Lay them on me!

Check out my Fractured Space Guide for more advice on how to not suck.