You know how the game works. Now how do you win? With just a few pro tips you will avoid a lot of rookie errors.

Read the info available about your ship. If you have a healer, don’t expect it to put up much of a fight. If your mobility is low, know that you will never escape anything. Ever. Work with your ship. 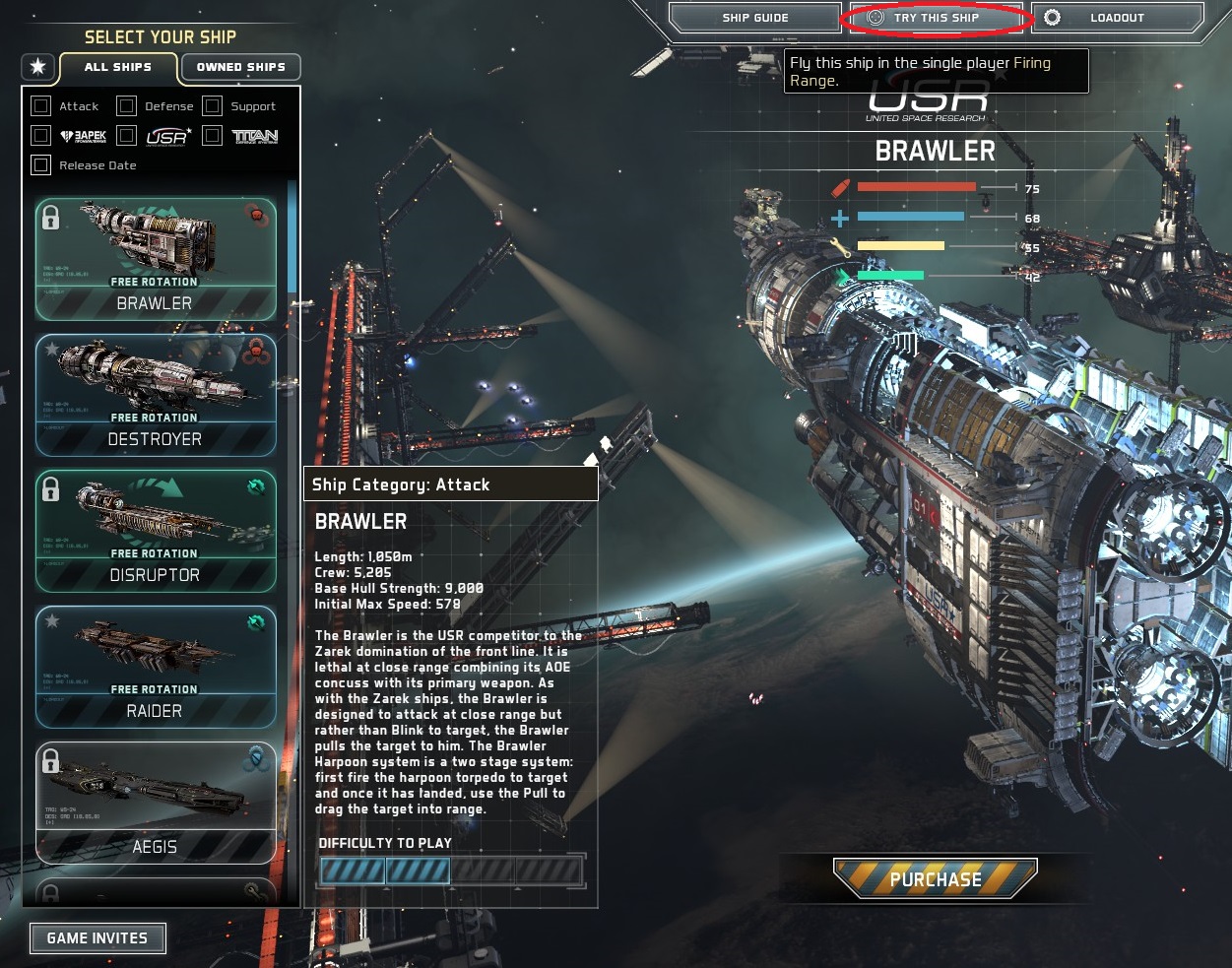 See the button I circled in red? Use it.

You can test a ship before you play with it or buy. Click “TRY THIS SHIP” in the hanger before you start a game. It will load an arena with a Colossus ship to kill. You can move around, use the abilities and blow up the Colossus. I have found this extremely useful. When the Colossus is dead, you can respawn it.

There is also a free rotation of ships each month. Play each one to understand how it works, and whether you enjoy playing it. After trying the free rotation ships you may want to buy them so you can destroy noobs in perpetuity.

Know The Other Guys’ Ships

With your knowledge gained from understanding your own ship, you can start to figure out how to counter opponents in-game. Every ship has an area it does poorly at. Knowing how to exploit weaknesses is straight out of Sun Tzu’s Art of War.

A HUUUUGE bonus is that the developers do not add ships all the time. I found with other MOBAs (looking at you LoL) you had to do serious research on every playable character before facing them or else you would get eaten alive. Fractured Space has kept the ship count down, allowing for slow gradual growth. You don’t have to dedicate half of your game time to not gaming and learning how every new ship works. It’s beautiful. It also helps writers of Fractured Space guides not have to constantly generate content.

Work as a Team

No matter how great your ship is, being outnumbered will typically mean death. This is not to say that you should always be evenly matched, but when at a numbers disadvantage it is worth chatting with your in-game amigos. Call for help, tell your team to focus a specific ship (focus the healers, they are crazy annoying and quite influential). If a teammate is always running off alone to get an objective, they will die. And not get the objective. Thanks. A lot.

Some ships are worth blowing up more than others. As I said above, healers are very influential. Their heal ability is relative to each ship. A healer heals a percentage of ship health, rather than a fixed value. Healing a tank is more effective than healing a light attack ship. A healer can heal 6000 points of damage on a tank in one shot, and yet only 1500 points of damage on a light ship. You can spend all day shooting a tank that is receiving good heals and it will never die. So skip shooting the tanks and shoot the healer. For the love of all that is holy, STOP SHOOTING THE TANKS THAT ARE GETTING HEALED! It can be crushingly painful to watch your team get picked apart while they focus one useless tank. 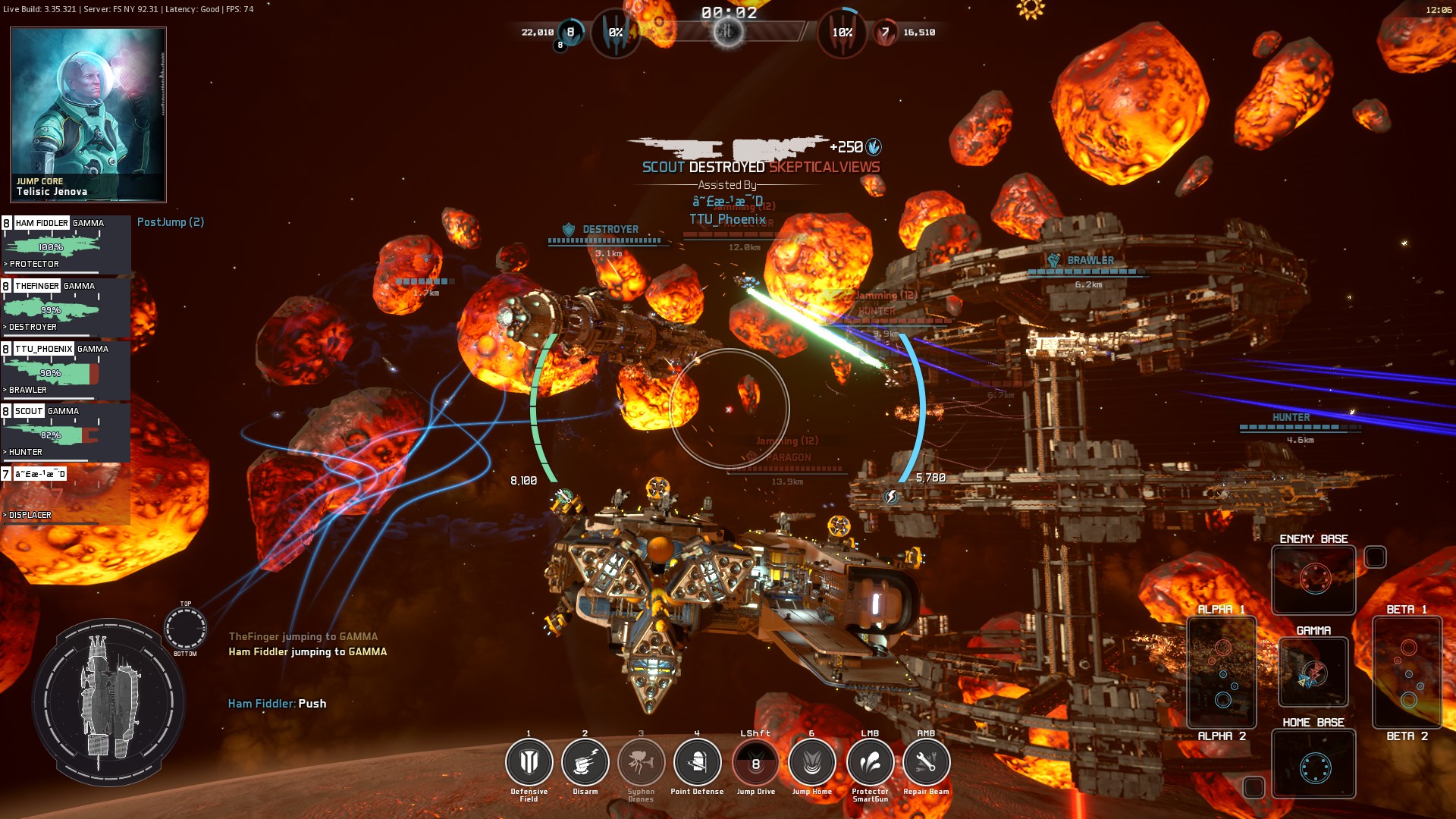 Who to shoot first? 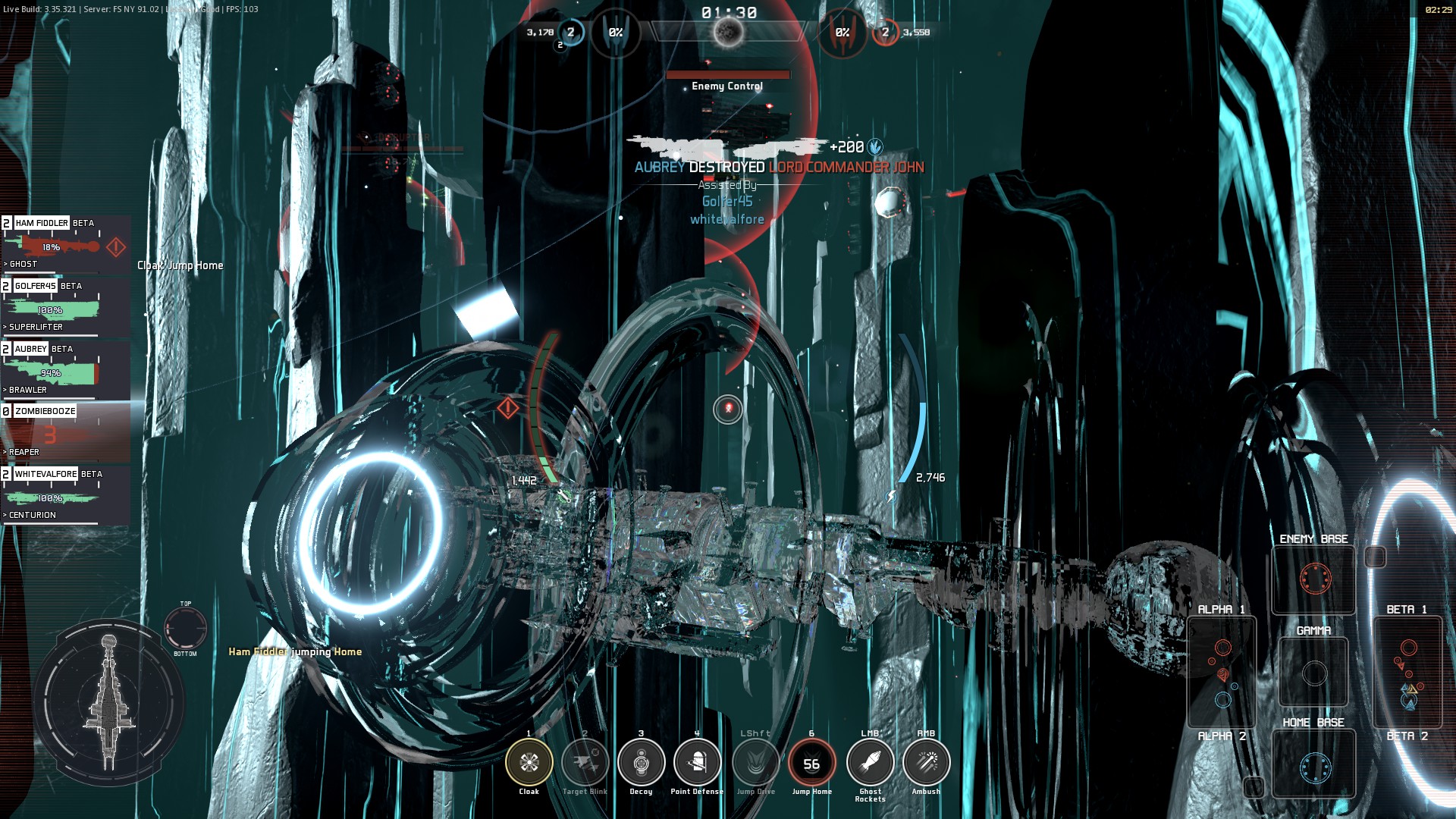 Cloaked and jumping at the same time? Oh my. . . But the enemy can see the jump rings, just not the ship 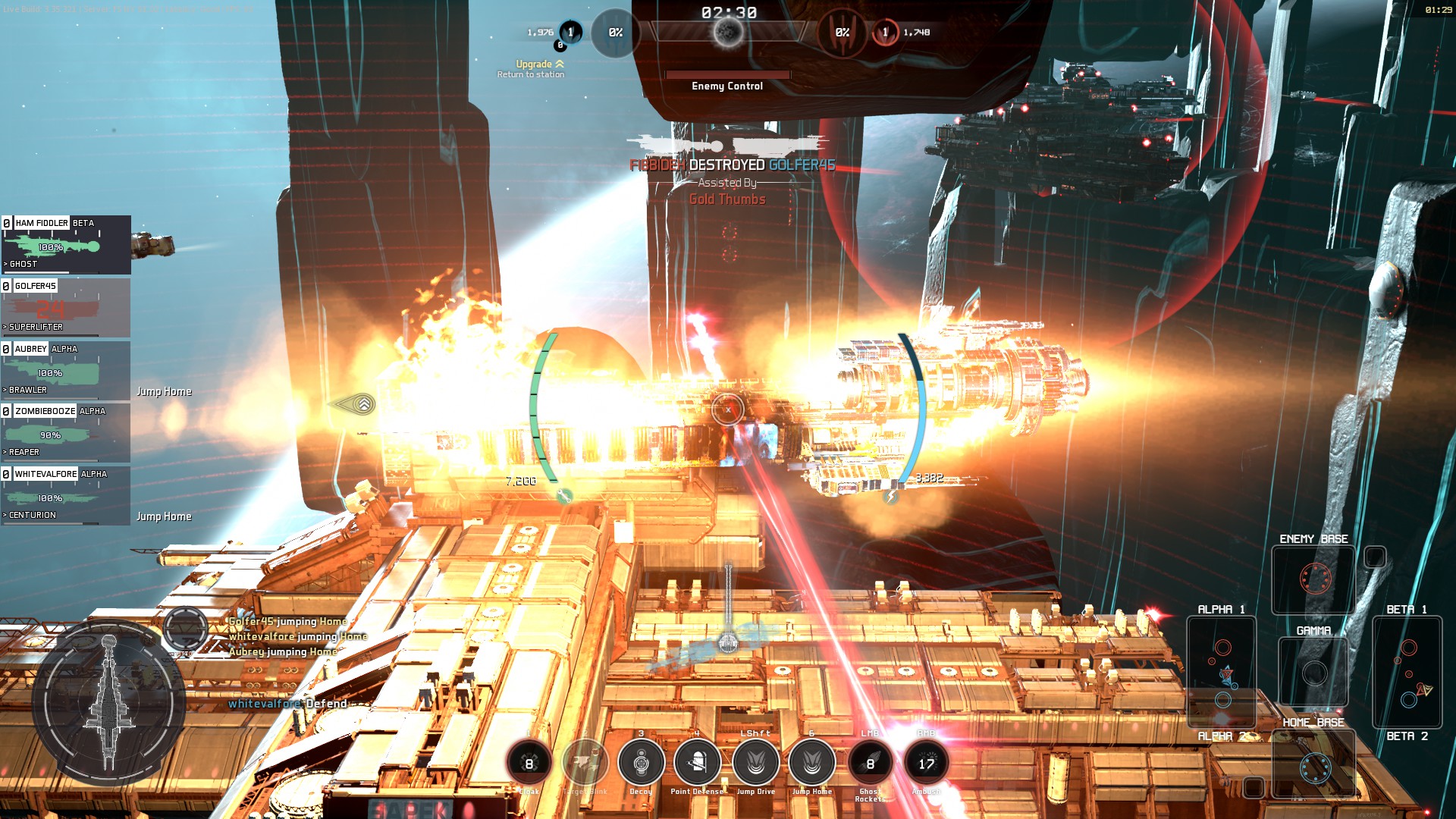 Surprise mamma jamma! This guy was jumping, and my Ghost popped out of nowhere. 1 shot kill

Several ships have the ability to go invisible. Once cloaked, some can stay invisible indefinitely. Most ships that can cloak are squishy. If they are out of cloak, they are worth shooting at. In order to prevent these ships from cloaking again you have to keep damage on them. Some ships are a natural counter to cloaked ships. The main gun of the Colossus fore example, is an inaccurate flak cannon. This does decent damage in a general area. If a ship is trying to escape and turn on cloak, this flak canon will make it impossible, while whittling down their health. 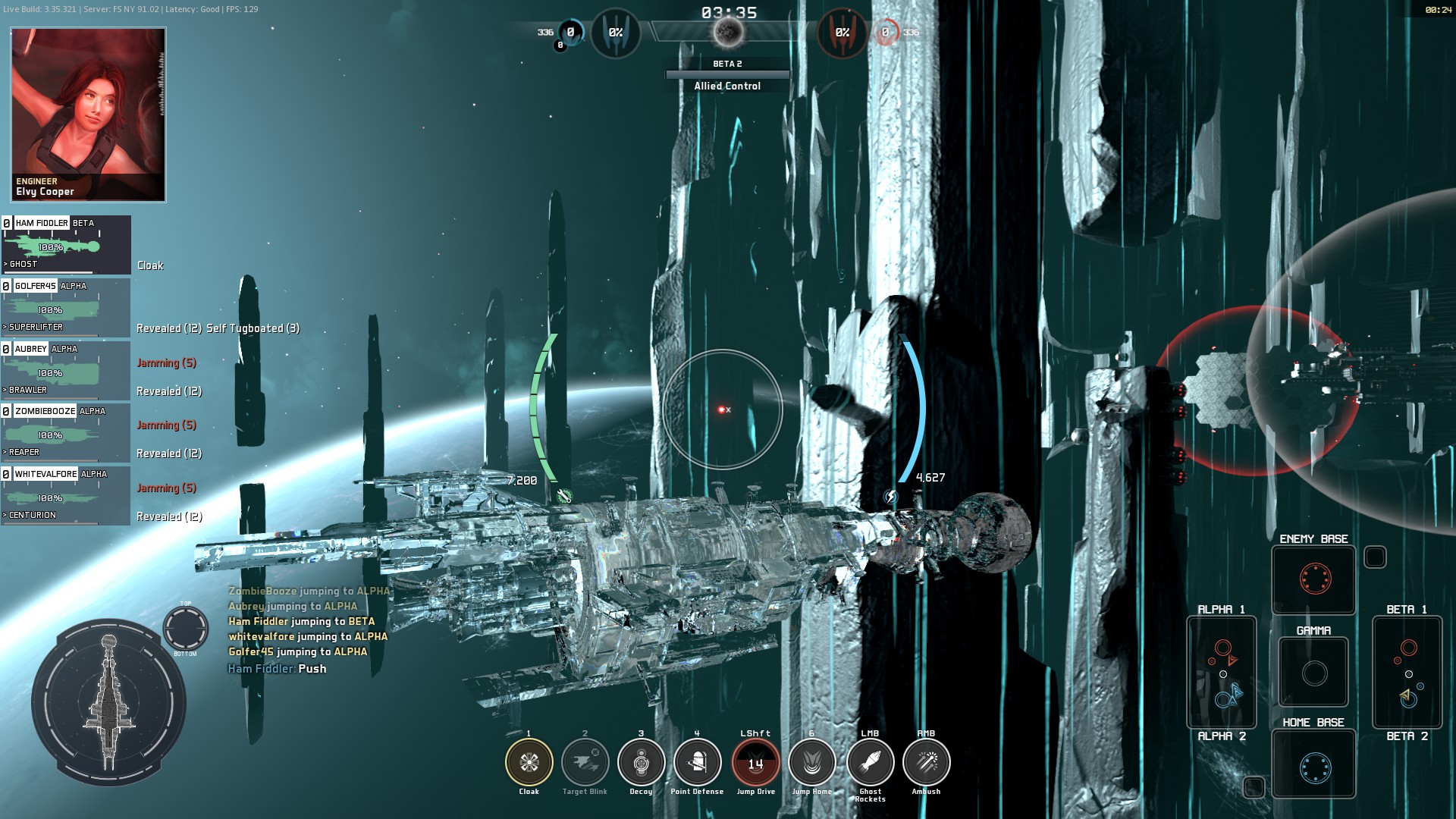 If you are piloting a stealth ship you better choose a good moment to reveal yourself. Think of how you are going to escape, and whether you will do enough damage to warrant going into a risky situation. A stealth ship is excellent for taking out snipers and healers. Weaker ships tend to hide in the back. A stealth ship can mop these fools up before they realize they are in any danger. The back line of a fight makes a great target because there is usually lots of room to run away.

Ships don’t have shields, they have armor. There are 6 sides of armor on each ship. When enough damage is dealt to a side to break the armor, a 3x damage multiplier takes place. The game will alert you about what armor is broken on an opponent. If will say “LEFT” or “BOTTOM” or whatever. Lay in the fire on the exposed side. Additionally, some ships have the ability to break armor for a short period of time. The Venturer is such a ship. If one is on your team, keep your eyes peeled for broken armor. This is a great time to focus fire and wipe a player out quickly. 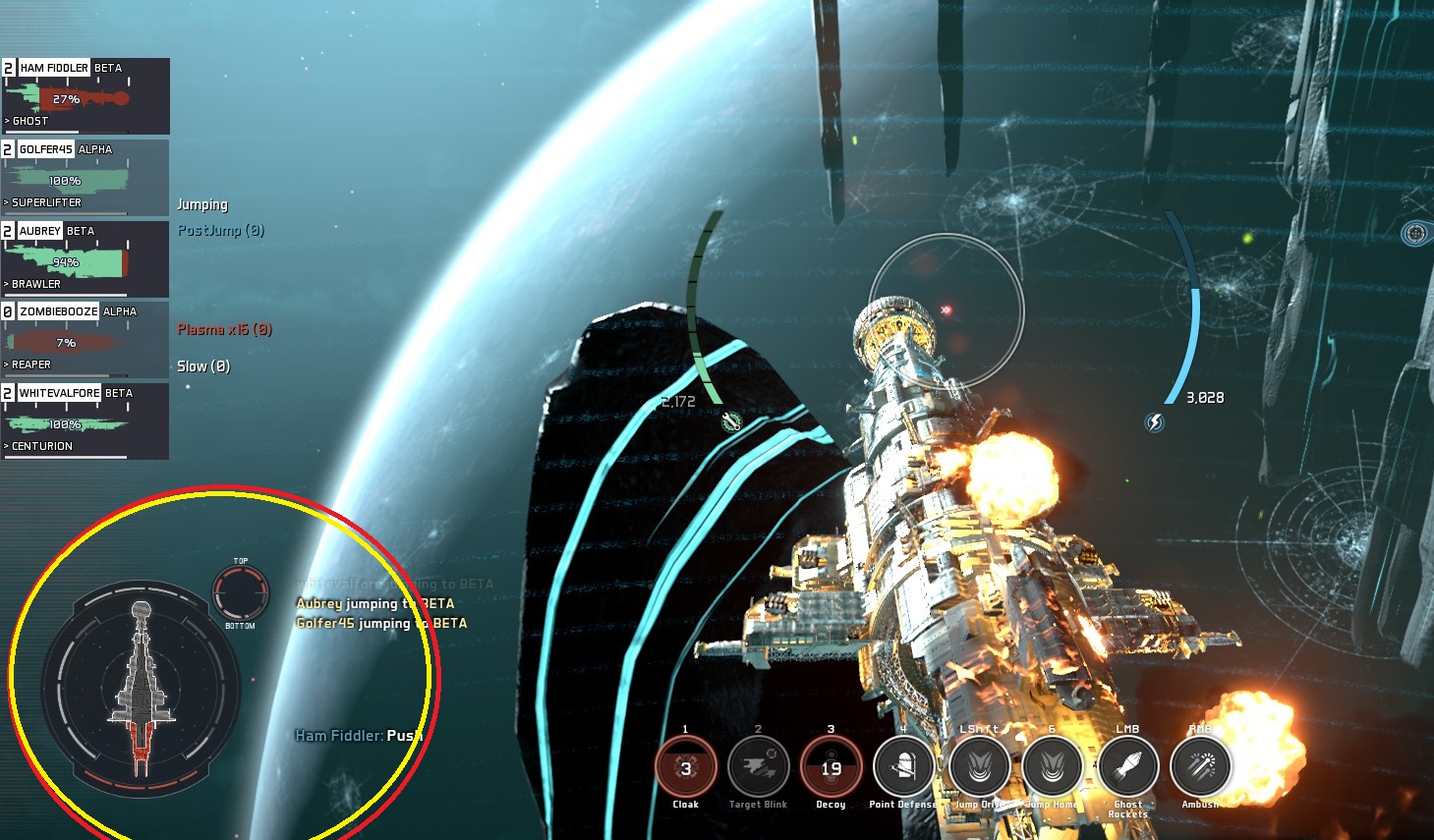 An armor indicator is in the bottom left of the HUD. If you notice your armor is out on a side, or if the game tells you (it usually does audibly), move that side so the enemy can’t shoot it. Most ships are capable of firing in whatever direction they want. This gives a lot of flexibility in what side of your ship is showing to the enemy. Keep rotating your visible side and you will find your survivability goes way up.

Gamma can be a powerful advantage, it boosts a series of stats. The first three gamma captures yield increasingly powerful boosts. The first gamma is the least important. If you are about to jump into gamma, but see you have a big numbers disadvantage, or they have already taken the station, don’t jump in. The last thing you want is your team to trickle in to gamma, one-by-one to be picked off. Especially because once the fight is over, the enemy will have the gamma boost! The first gamma is not that big of a difference, if you can see your team will not win gamma, go take a couple mines. Having a level advantage can be just as effective, especially because a resource lead from the mines will persist the entire game, as long as you keep an even hold on the mines throughout gameplay. 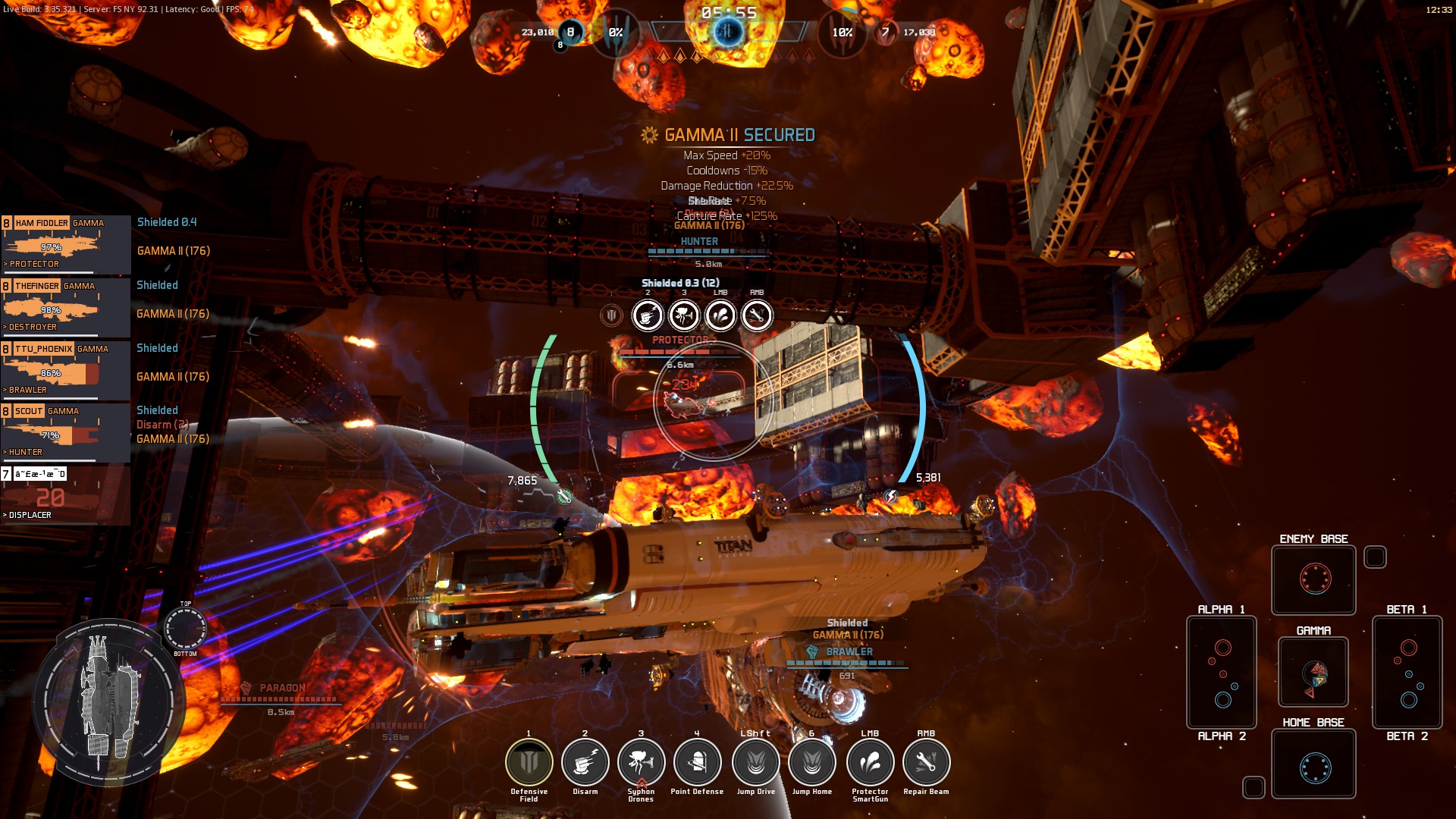 Note the top middle says what the Gamma III boost is

Be smart about gamma. It can be a game changer, but can change it for either team. Prioritize targets, get inside the capture bubble, and use the gamma station as cover if you need to. Lots of sneaky healers will zip around the exterior, forever staying out of reach. If you can lay mines, shoot them around the inside of the station, you know a lot of traffic will go through there.

I will keep updating this Fractured Space guide, so come back often. There are a ton of tips that can push your win rate easily over 50%. Winning is more money, and more money is more ships. If you have any pointers, or any questions leave a comment.

Stick around for ship guides as well. These will be added over time.