Hello neckbeards. Are you burned out of League of Legends, Dota 2, Heroes of the Storm, Overwatch, blah blah blah, etc? Well Fractured Space is the MOBA game that may tickle your fancy, keeping great competitive gameplay, but breaking out of the typical gravity bound MOBA games. Let this Fractured Space guide serve as a killer introduction to the game, how it is played, and then hit page 2 for the advanced tips.

If you are new to Fractured Space, or an old-timer (perhaps even playing from back when you had to buy the game) this guide will have important information for you. The game has gone through some serious updates and tweaking, it will be worth paying attention. This is a solid Fractured Space guide. The upcoming ship guides in particular will be worth sticking around for (content to be uploaded soon). Make HtR your permanent Fractured Space guide, cuz ole HamFiddler is a huge nerd for it.

Pay attention to the info when  you login. There are frequent weekend challenges that will reward you with delicious free stuff. It’s an easy way to get an upper hand, without spending real world dough. 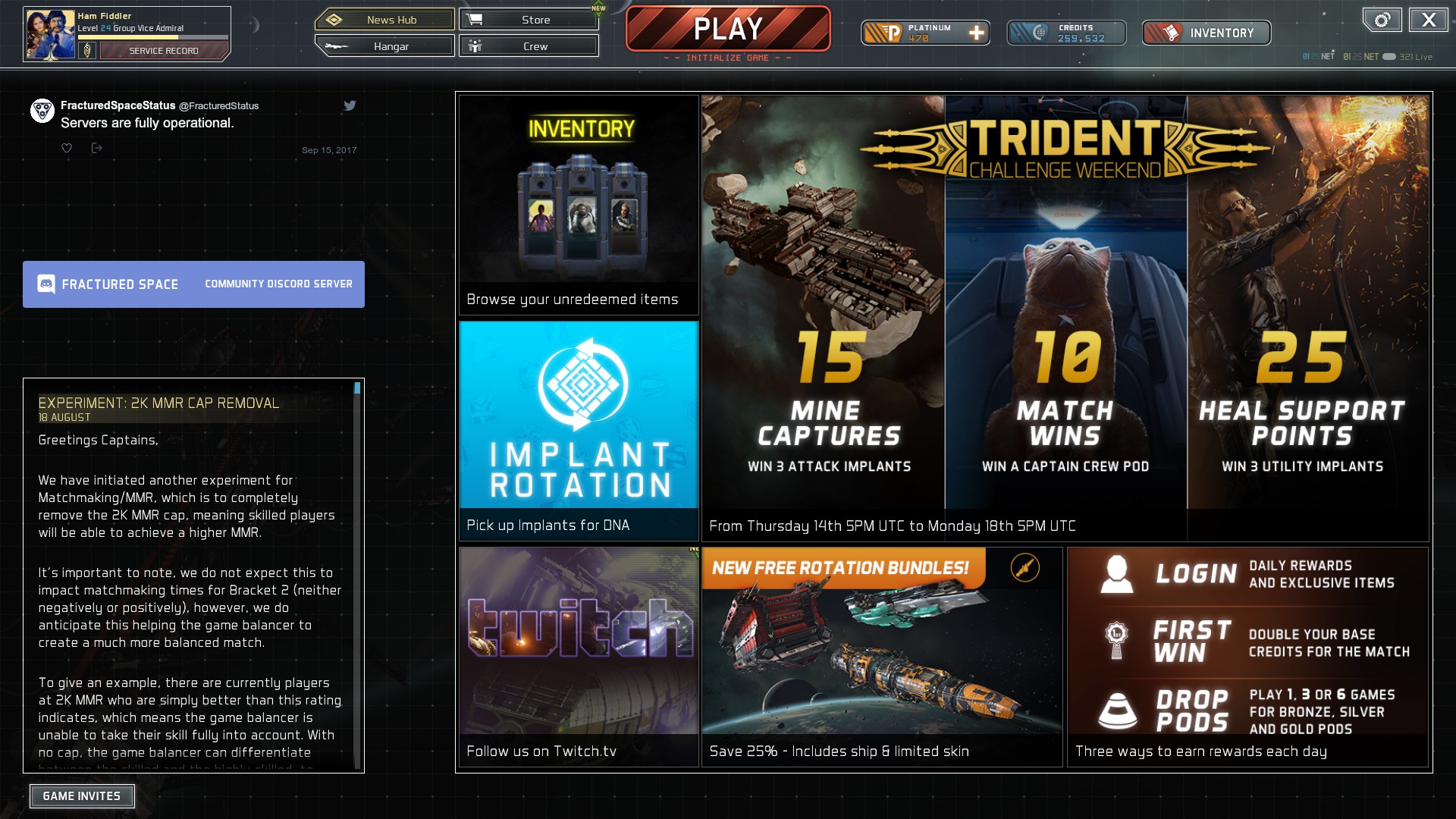 The other thing you will notice when logging in is the daily reward. Fortunately, this reward is not based on consecutive logins. The developers just want you to get online. So login! Once a day. You don’t even have to play. I have had days where I logged in for my reward, and to get one day closer to a free ship (the Leviathon, it’s a pretty solid tank with a mega laser that melts ships).

How the Game Games

The basic gameplay is super straightforward. Blow up the enemy home base. Pretty much like every other MOBA. The way this objective is accomplished is unique though.

There are no minions, or NPCs in-game to kill and be rewarded with money or upgrade points. Fractured Space revolves around capturing mines which passively grow your income. Very corporate. Capturing mines is accomplished by moving inside their capture bubble (a sphere around the mine) and staying in it till it is yours. This process doesn’t take very long, and gets quicker as the game progresses. I lied a little when I said there were no NPCs to kill and get income. An enemy controlled mine has little worker ships flying around it, mining, that you can blow up to receive a small amount of income. This helps to pass the time, and not feel like a useless bum when travelling through an empty sector to capture a mine. 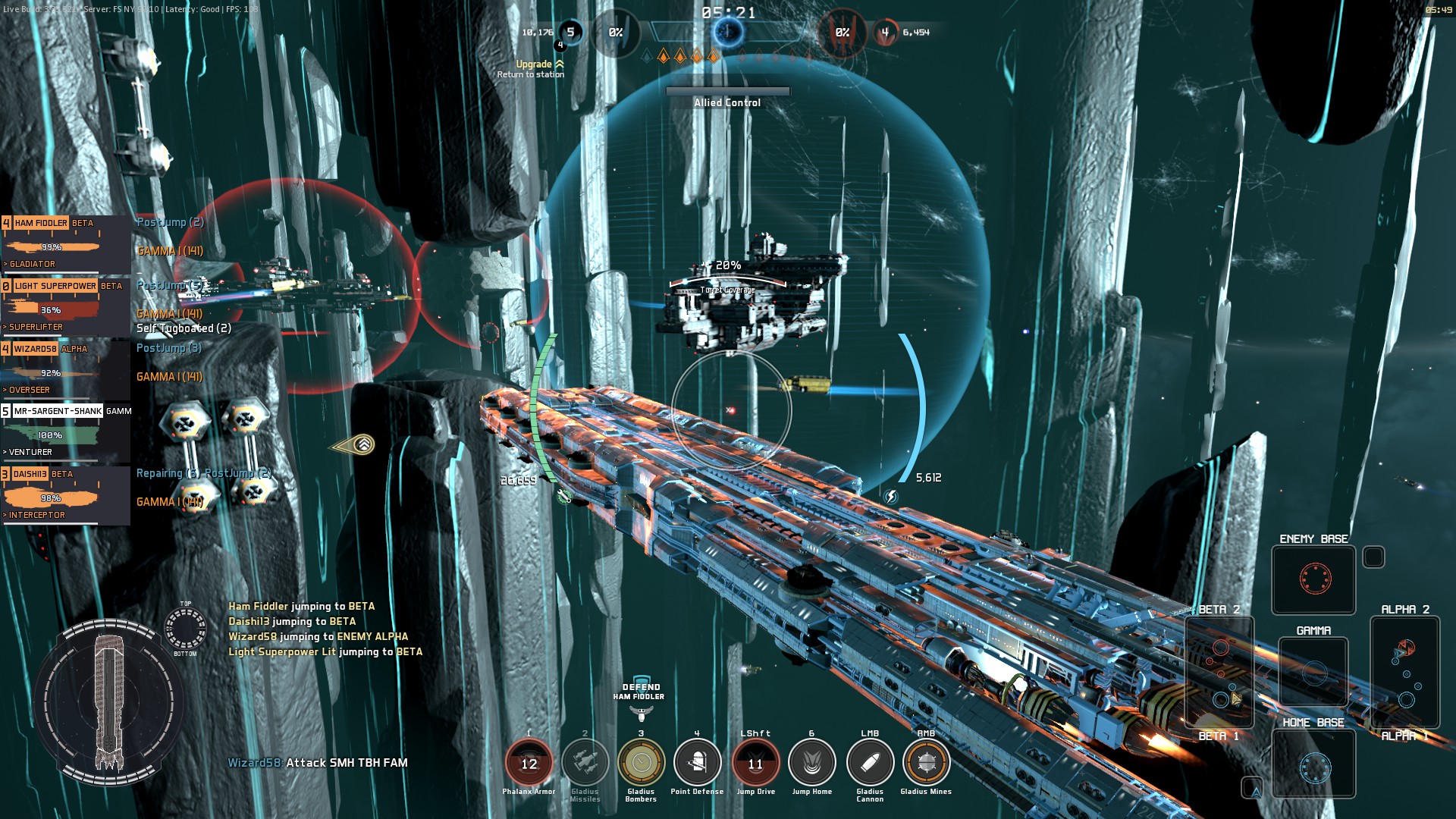 Fractured Space friendly mine and enemy mine, and a friendly little miner NPC cruising by

Another type of station you will encounter in game is called a Forward Station. Forward stations allow the controlling team to heal, as well as receive upgrades that have accumulated through the passive income system. Everyone on your team levels at the same time, but capturing and holding more mines than the enemy will allow your team to level up before the enemy. Super hot tip here: when your passive income has allowed your ship to be upgraded, it will only upgrade at an owned forward station. Your ship will not upgrade itself on the fly. So jet over to the capture bubble of a friendly forward station and your ship will instantly be upgraded.

Forward station, great for hiding behind

The map is extremely useful, and gives a large amount of information. It displays the state of the game as visible to your team. Naturally it shows all friendly ship locations, and orientations. It also shows which teams owns each mine and forward base. The map will also show targetable enemy ship locations and their orientation, as detected by you and your teammates.

Note: I intentionally said “targetable enemy” for a reason. There are times when you can visually see an opponent, but some ships have worse target acquisition abilities than others. If your ship is bad at detecting enemy ships, that info will not be available to the team until you move close enough to the enemy to detect them. This gap between vision and target acquisition is not that big, so don’t sweat it. 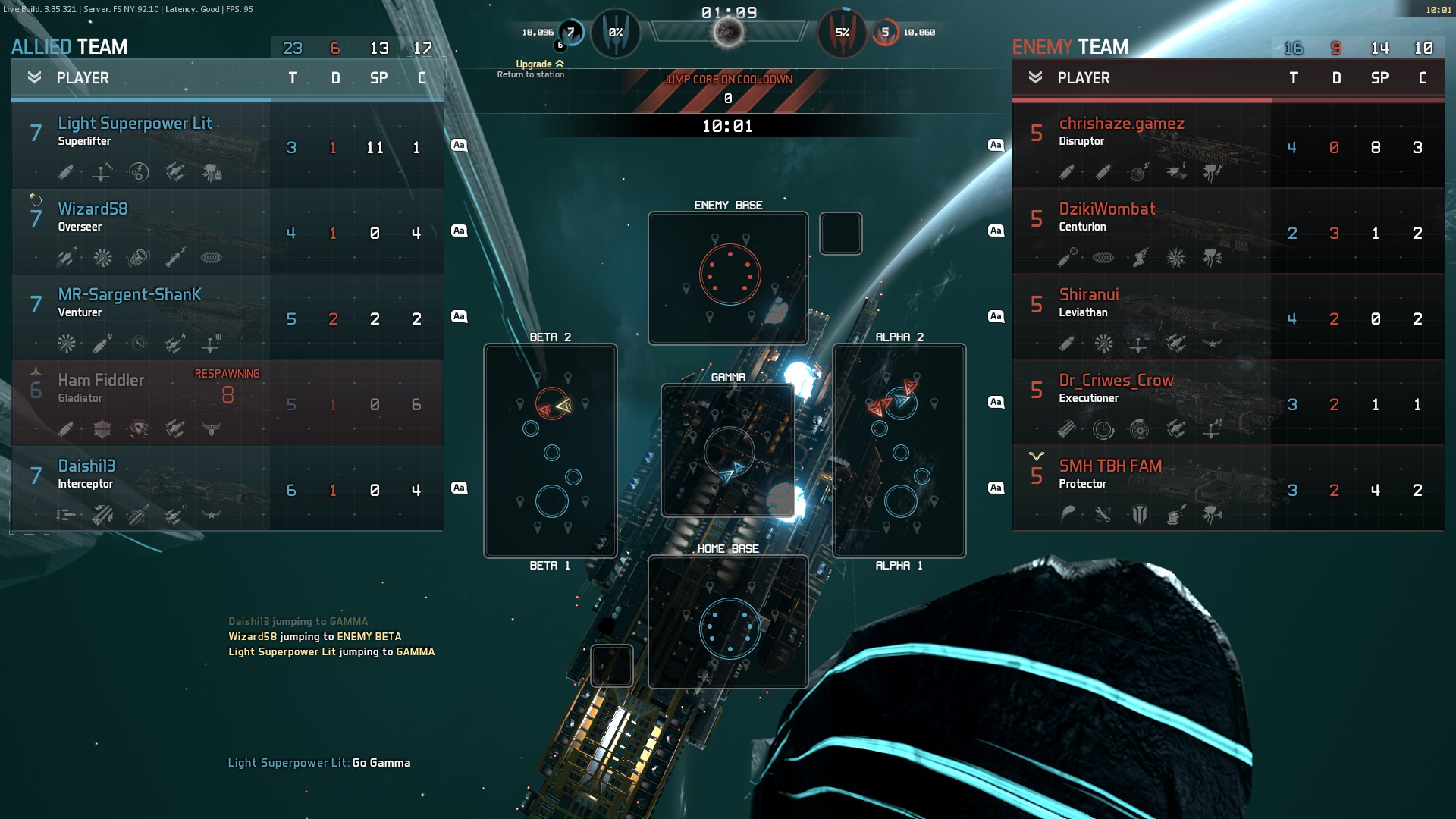 Note that my team is crushing it

Traveling around the map is accomplished largely by jumping. Think of jumping like going into hyperspace, or travelling at warp speed. When you jump, you travel between sectors instantaneously (after your jump core warms up for a few seconds). Jumping keeps the game lively by being able to rapidly move between sectors, so you never feel stuck in lane. The catch to jumping is that it makes your ship significantly more vulnerable to enemy fire. SIGNIFICANTLY! Hot tip: Do not try to jump when under heavy fire, you will be obliterated. Try to jump when away from enemies or hidden behind a barrier (like a mine or asteroid).

Warping in to gamma baby

Jumping is really easy to understand or control. With keyboard and mouse, hold Left Shift to bring up the map with the jumping overlay. Move your mouse around the map to a jump point you can travel to, i.e. forward bases on your side of the map, gamma, or the enemy base if you own an enemy forward base.

There is a second jump option, and that is to jump straight into the center of your home base. This requires no targeting, and functions separately from your Left Shift jump ability. Jumping home has its own cooldown, one that is longer than the Left Shift jump ability. Jumping home is triggered by pressing the number 6. To switch rapidly between lanes in-game, jump home (press 6 on the keyboard) and once at the home base hold Left Shift and select the lane location you want to jump to. In a very short amount of time you will be back in the action, and blowing up noobs.

The Villainous Enemy Base 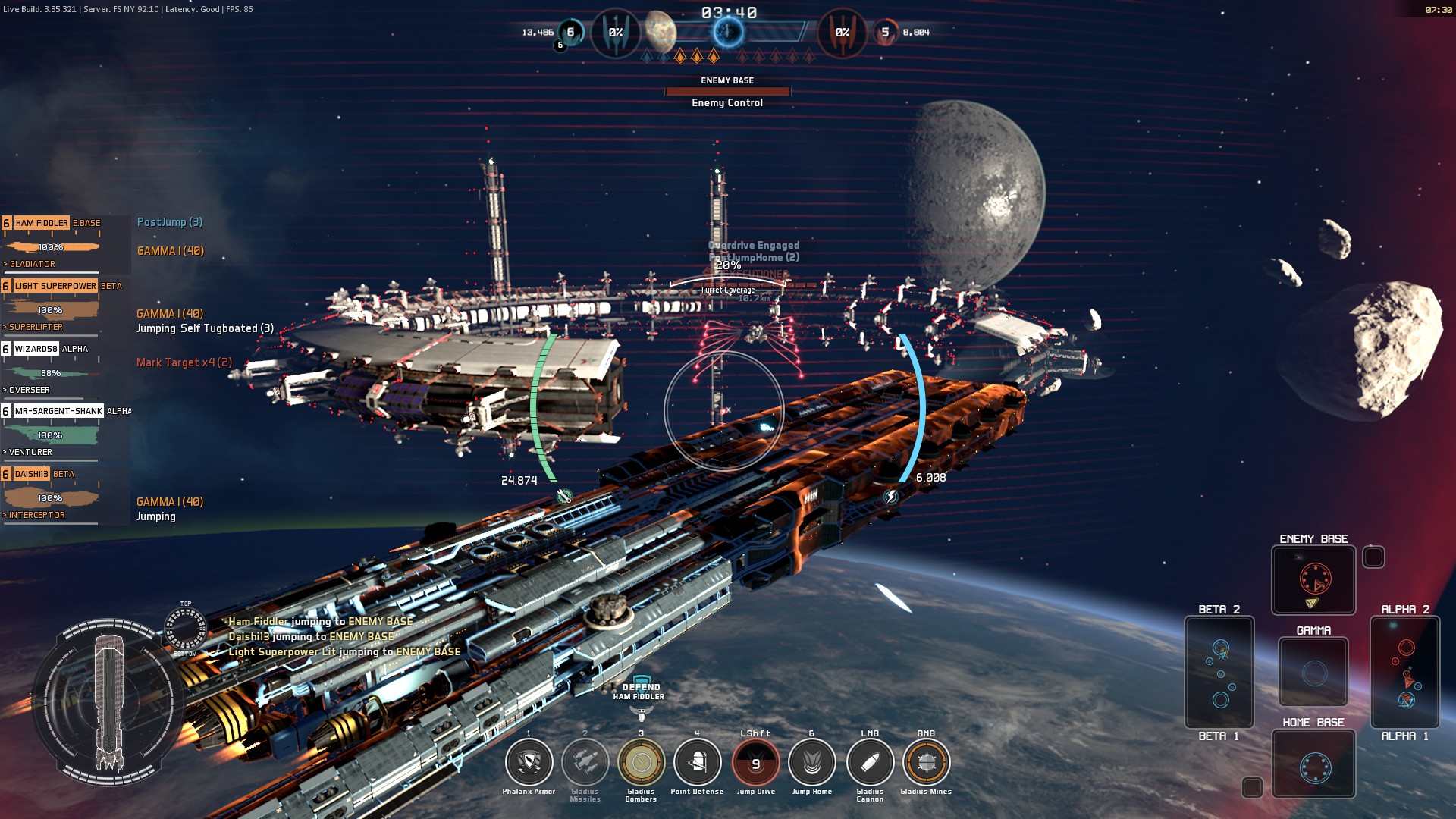 If you are rusty on your ancient Greek, gamma is literally translated as “central starbase which yields great bonuses.” The Greeks were really ahead of their time.

Every couple of minutes, the gamma base is up for grabs. Jump to the central point on the map and move within the capture bubble to claim gamma and its sweet treasures for your team. Note: the other team will fight you tooth and nail for gamma, so expect a big fight. It is worth showing up to gamma 30 seconds early so you can move into the bubble as soon as gamma is available for capture.

You can see the gamma timer at the top-center of all of the in-game screenshots I have in this article. Luckily since this is a timer, I don’t really have to explain how it works.

The developers have made it easy to refresh yourself in game on what is going on, and how to control your ship. Just remember OK. It acts like a mini Fractured Space guide. 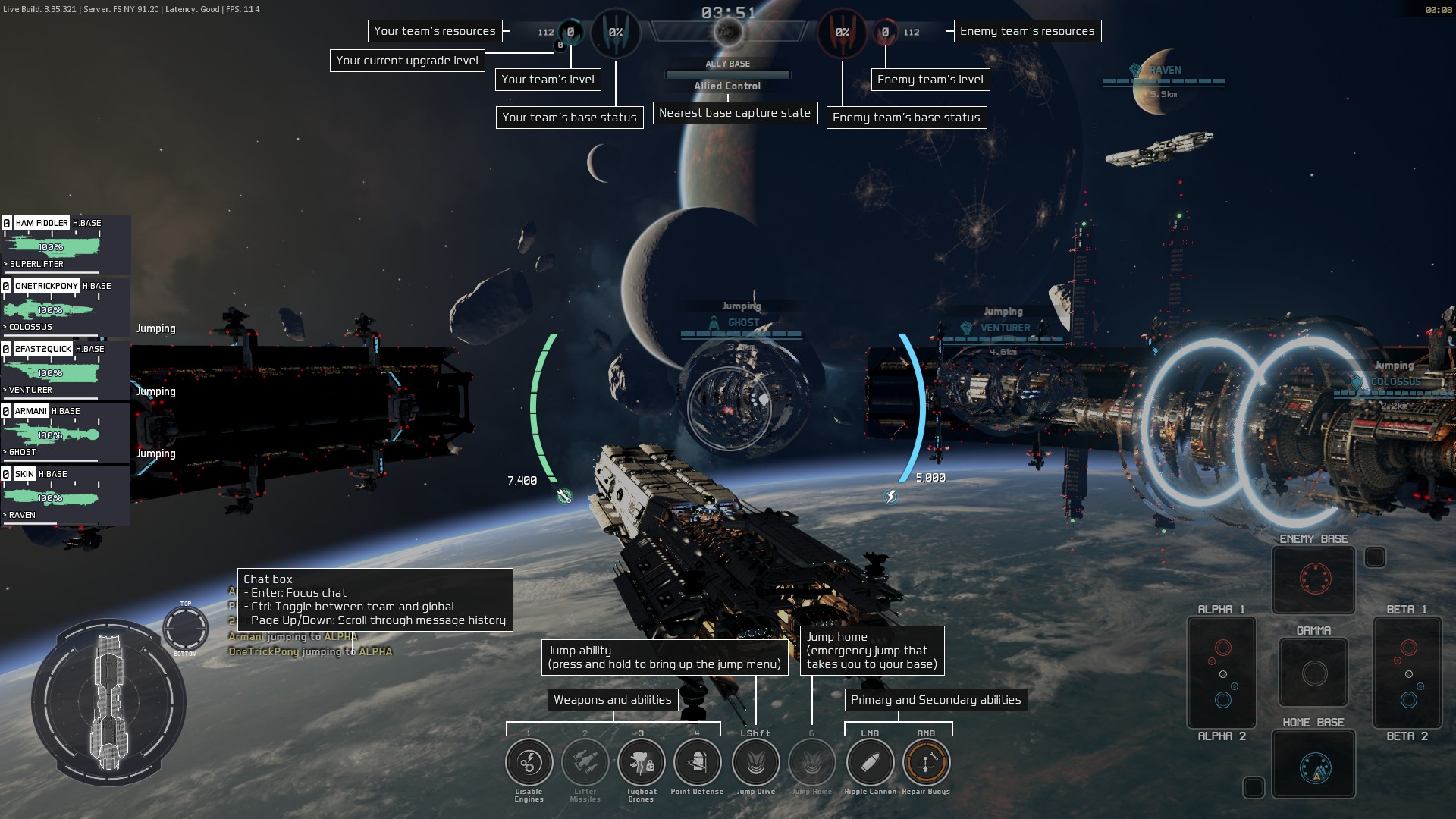 Pressing, and holding, O in game will bring up an overlay explaining everything on your HUD. It will give you the abilty to understand all the information available to you. 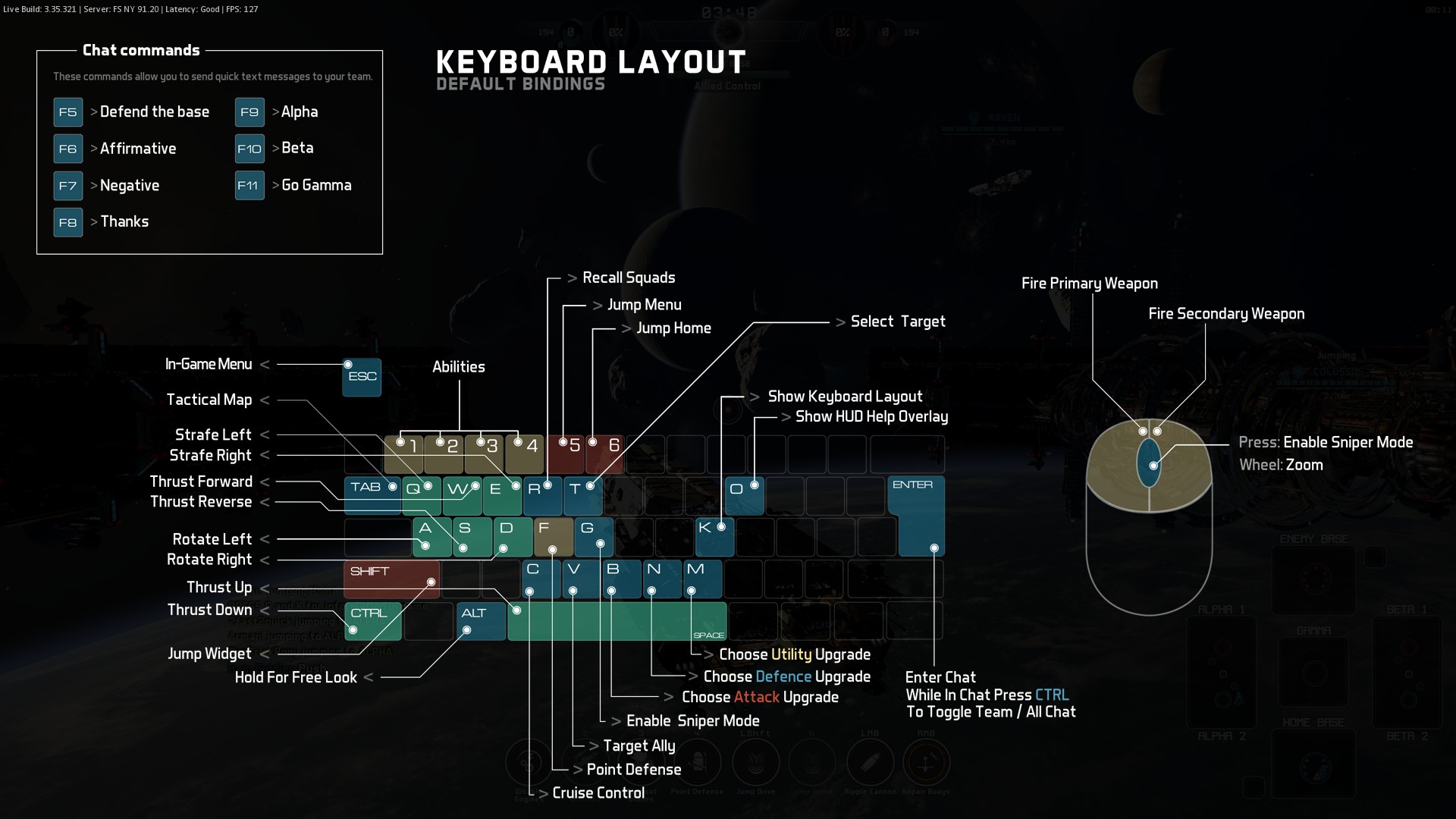 Press K for, “What is this keyboard doing in front of me?”

Pressing, and holding, K in game will show the keyboard layout, so you can remember how to use all your abilities and pilot your ship like a pro. You will need to be familiar with all the controls to maximise the effectiveness of your ship. Stick around for the Fractured Space Guide: Ship Guides to come. You will get in-depth descriptions on how to command each ship, as well as ship pros, cons, and tips.