Fortnite: Battle Royale has become rather popular in the gaming world, and with that success has come a number of updates to the game. These updates tweak the game and add new gameplay elements. As of today, the largest update, Update 2.2.0 is now live on PC, PS4, and Xbox One, and with is has come a number of map additions as well as game improvements. Let’s take a look at what’s new below (see original patch notes here).

The biggest and most impactful change in the Fortnite: Battle Royale Update 2.2.0 are the new map additions and revamps it has made. On the additions side of things, you will notice a number of new areas on the Western side of the map. These new areas are: Tilted Towers, Snobby Shores, Shifty Shafts, Junk Junction, and Haunted Hills. The new locales range from cities to mineshafts and will hopefully change the gameplay dynamic (new areas means new spots to go).

Further adding to the map additions are the introduction of biomes. These biomes introduce new tilesets to different areas of the map, which should help make areas feel more unique then the current ‘everything is rolling, grassy hills’ approach.

Alongside the new map additions and biomes, Fortnite: Battle Royale‘s newest update is revamping some existing buildings on the map. Some of the shops in current cities have had their layouts changed in order to facilitate easier traversal and lootability. 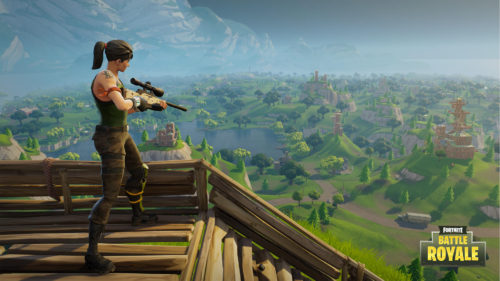 How Fortnite: Battle Royale loads the map has been changed. Image via Epic.

Originally, Fortnite: Battle Royale would load the entire map at once, placing higher demand on systems. Now, with Update 2.2.0, the game utilizes what Epic is calling “level streaming” which essentially means the map loads piece by piece. Switching to this approach will have no impact on gameplay, but should improve performance and create a smoother game experience.

Alongside the two major changes above are a number of other changes including UI, quality of life, art/animation, and many other areas. I’ve picked out some interesting changes that I spotted, but to see everything I highly recommend checking out the official patch notes (there’s a lot of stuff).

Fans of Fortnite: Battle Royale should be encouraged to see such a large update released for their game. Given the success of the title, it’s nice to see Epic actively working to address issues and advance the game through new additions. With Update 2.2.0 now out, I am curious to see where Epic takes their smash success next.

Thoughts on the map additions? Thoughts on Update 2.2.0? What do you want to see Epic add next? Let me know in The Pit below.