Fortnite: Battle Royale has been making a strong case of late for being the most popular Battle Royale game on the market. The game recently set a mindblowing 3.4 million concurrent players (topping PUBG’s 3.2 million record) record and is regularly the top watched game on Twitch. So what do you do with a highly successful game like Fortnite: Battle Royale? You add jetpacks to it. 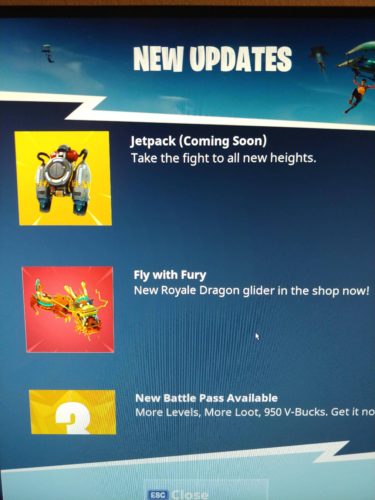 A post over on Reddit by user xCosmit suggests that jetpacks may soon be coming to Fortnite: Battle Royale. While the post is nothing more than a screenshot, we do get to see the jetpack in all its glory along with a coming soon notifier.

When and how the jetpack will make its arrival to Fortnite: Battle Royale has yet to be announced by Epic Games, but it seems like this new mechanic will be coming soon.  How the jetpack will change gameplay also remains to be seen as it will offer the ability to reach higher places without the need for building.

Thoughts on Fortnite Battle Royale getting jetpacks? Let me hear them in The Pit below.