As a fan of the Souls series, I need to admit something. Up until recently, I had never played Bloodborne (I know). Luckily at the start of 2018 I was able to acquire a PS4 and Bloodborne. Since I’ve finally played it, here is my Bloodborne review.

Released back in 2015, Bloodborne was a non-Souls game to come out of developer FromSoftware. The game was released exclusively on PlayStation 4 and was met with critical praise. Fans found Bloodborne to add a nice twist to many of the Souls-specific gameplay elements that the series has been known for.

Bloodborne like the Souls games is an Action RPG that features elements such as levelling, diverse weapons and armor, and difficult boss fights. Unlike the Souls series, however, Bloodborne takes place in a Victorian Gothic setting and features new mechanics such as guns, visceral attacks, and the Rally combat system (a way of regaining health during fights). 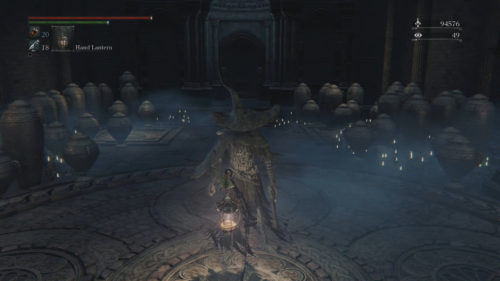 If you’ve played previous games developed by FromSoftware you probably have a good idea of how Bloodborne plays. In recent years, FromSoftware has developed a sort of reputation for creating Souls games. These games follow a similar formula and are notoriously ‘hard’. If you don’t know the formula, I will dive into it a bit below.

Bloodborne follows a similar formula as previous Souls games, but adds some very refreshing twists. Like in the Souls games you will be spending your time exploring, facing diverse enemies, collecting blood echoes (the game’s souls), dying and repeating the process over and over. What sets Bloodborne apart (and makes it really good), is the twists the game adds to these tried and tested mechanics.

The most shocking changes you will notice when you play Bloodborne are found in the game’s combat. Unlike Souls games which tend to be slow (reliance on shields, etc.), Bloodborne really speeds up combat, making it much more fluid and dynamic. This speed is developed by the interesting weapons (and weapon transformations), Rally System, and enemy design in Bloodborne.

Weapon wise, you will find Bloodborne to have a number of interesting weapons and weapon transformations. These weapons are beautifully designed and feel like they realistically would be present inside the world of Yharnam.

From the start of Bloodborne I was immediately blown away with the weapon design in the game. Each weapon feels unique and plays differently. Couple the unique design with each weapons ability to transform into other weapons types (longsword into greatsword) and you have a number of ways to play through Bloodborne.

The Rally system is an entirely new addition to Bloodborne and essentially allows players to return health by attacking immediately upon taking damage. This system changes how you approach fights and encourages you to go on the attack far more often than the sword and board approach found in a Souls game. I really enjoyed this system and loved its impact on combat.

Enemy design in Bloodborne has to be some of the most top-notch work that FromSoftware has done. Based around the impact of blood-healing (storyline), you will face off against a variety of diverse enemies that are the result of an overzealousness from The Healing Church. My favorite enemy has to be *Spoiler* Orphan of Kos who is birthed as you enter the boss arena and wields a placenta like weapon to smash you to death. Designs like this just really make the Bloodborne experience feel creepy and awesome.

I personally play FromSoftware because I enjoy the recipe they’ve created above, but I will also touch on some miscellaneous points below.

Really strong sound design from both an ambient and OST perspective. Bloodborne has to have some of the best songs of any Soulsborne game I’ve played (which is all of them.

This was the first time I’ve played a Soulsborne on a console (besides Demon’s Souls), which was a bit of an adjustment. While Bloodborne looks good, I certainly wasn’t blown away by anything graphically. It does the job required, but isn’t the best looking game of the Soulsborne series.

A major aspect of any Soulsborne game is how hard it is. Bloodborne is definitely on the harder side of games I have played. Many of the bosses can be incredibly punishing and require a bit of perseverance. I personally love this difficulty, but realize many will not.

I’m a huge fan of how FromSoftware delivers story, which essentially involves exploring the world and piecing things together. This leads me to watch lore videos and read up on everything. This lack of direction isn’t for everyone though.

A bit of a misfire here for me. If you don’t know, Chalice Dungeons are dungeons you can run that aren’t related to the main storyline. The idea here is to create something like a Binding of Isaac for Bloodborne. What I disliked about the Chalice Dungeons was how little difference their seemed to be in the different one (gets repetitive rather quickly).

I really, really, really enjoyed my playthrough of Bloodborne. FromSoftware moving their formula into an entirely new game was a really good decision and has me excited for new projects coming out of the studio. Every part of Bloodborne feels painstakingly designed and really moves the formula forward by introducing things like the Rally System. The only real aspect I found I had some problems with was the Chalice Dungeon, which didn’t quite capture my attention.

Thoughts on my Bloodborne review? What would you rate it? Let me hear them in The Pit below.