If you recall, back in April 2016, I said I was going to review videogame based movies at the behest of Poppa @FilmApe. The first movie I reviewed was Super Mario Bros. and the review was well liked and received generally well. Fast forward about a year and a month, and I’m like, why not start the series back up again? After looking at the wikipedia for Videogame movies, I settled for crafting a Doom movie review. With Dwayne Johnson being such a in demand actor, I thought it would be nice to look back at the film that started it all.

Released in 2005, the Doom movie is based on the game of the same name. As a young kid, I remember seeing the trailer for Doom and the promise it made of having an FPS sequence. Being 14 at the time, I imagined the Doom movie being really cool… Now that I’m 26, I realize what an idiot young Enricofairme was. The Doom movie is pure and utter trash.

From what I could gather, Doom tells the story of a group of marines who are tasked with investigating some sort of security breach on a Mars base. The Rock’s Sarge, leads the group of marines, who walk around with big guns and throw out horrible one liners. Once the Marines make it to the Mars base, they wander around terribly designed sets that are mind numbingly boring. If you’ve ever been to laser tag, you were basically on the set of the Doom movie. 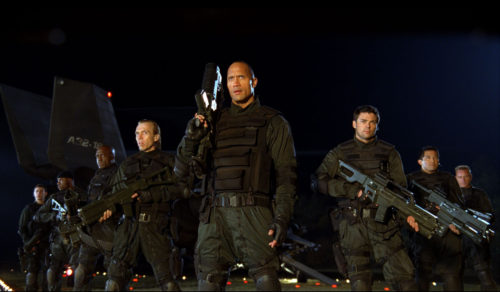 As the Marines venture deeper into the science base, things take a turn. GUESS HOW? The company they work for was actually experimenting on humans. These humans are genetically altered, meaning they are stronger, faster, and generally more crazy than average humans. People get picked off left and right, until there are only a few people left. What’s odd is that Doom is a game about Demons, but Doom the movie is about Zombies(?). This makes the film feel especially lame as the Zombie creature things are just plain boring. Give me demons and portals! 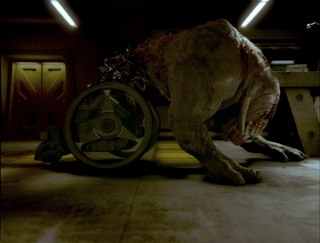 What exactly is this suppose to be? Some dog thing?

Across the board, the acting is atrocious. The Rock is especially wooden in Doom, which is interesting to see as he is now the hottest commodity in Hollywood. Other notables in the film include Star Trek‘s Karl Urban, and Gone Girl‘s Rosamund Pike. Both of whom are equally as bad. The writing doesn’t help the performances either. 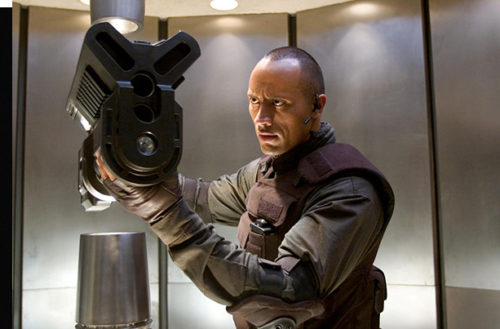 The BFG makes an appearance.

Some writing gems I pulled out include:

“Does it ever bother you, you could’ve spent your life looking in a microscope instead of your sniper scope?”

“Goddamn It” – Takes out knife and starts cutting a cross into arm, “I took his name in vain.”

These are just a few of the tasty gems I pulled out of Doom’s writing. There were way more horrible lines, but I got tired. So while the story, writing and acting are all bad, how is the action you ask? Equally bad. 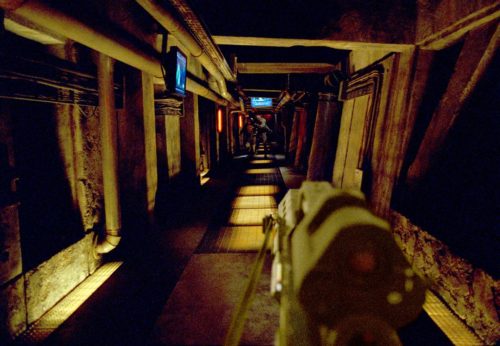 Not all of the Doom Movie Sucks

Not all of the Doom movie sucks. Doom features a lead scientist is named Dr. Carmack, a not at all obvious reference to John Carmack. That same Dr. Carmack rips his own ear off, which is pretty sweet. There’s a scene where the rookie asks for some drugs from the crazy guy and he produces a vial with what looks to be Skittles inside. There’re some crazy space titties which I don’t mind at all. I also didn’t mind the wheelchair creature as pictured above, because hey why not? There’s a scene where the Rock kills a bunch of innocent people, which is fun.

Ah, who am I kidding? The Doom movie sucks.

What did you think of my Doom Movie review? Like it? Hate it? Let me know in the Pit below.