Home » Gaming News » What is That? Donut County Tasks You With Filling Holes

What is That? Donut County Tasks You With Filling Holes

What Remains of Edith Finch publisher Annapurna is bringing holes to the mass market. Seriously. The upcoming Donut County focuses on holes and filling them with stuff. Basically the game looks like Katamari Damacy but the balls are replaced by holes. Let’s take a closer look at Donut County below. 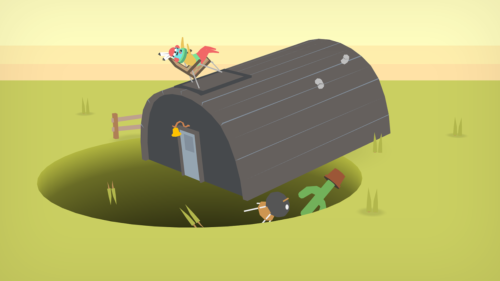 Created by Ben Esposito, Donut County is about  “…a mysterious growing hole…” in the land of Donut County. As shown in various gameplay spots like this, this, and this, the game is segmented into levels. Each level takes place in a specific locale in Donut County. As the level progresses and the hole devours items from the surface, it becomes larger and capable of swallowing larger items. By the end of each level, your hole becomes so massive, pretty much anything will fit inside it.

While that covers the basic gameplay elements of Donut County, there is also a storyline running parallel to the events occurring in Donut County. The game’s website describes the story as:

“Meanwhile, deep underground, the residents of Donut County must figure out who opened up the holes that wrecked their home. Only Mira, a teen who works at the local donut shop, knows the truth — but it’s kind of her fault.”

Overall, Donut County looks to be an interesting and intriguing indie game about holes. The interesting art style and strange story has me intrigued to pick up the game. Unfortunately, both the release date and console availability appears to have yet been finalized. As of writing this, Donut County is slated for release in 2018 on PC as well as IOS. Console availability will be finalized and announced in the coming months.

What do you think of Donut County? Want to fill some holes? Tell me about it in The Pit below.