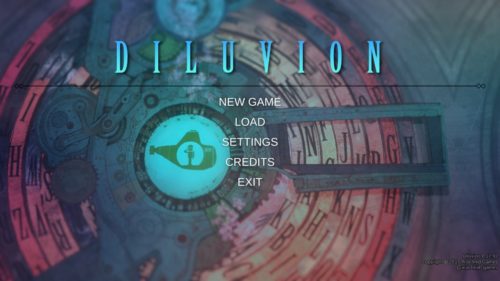 If you are on the ball and have purchased Diluvion, kudos to you. Released in February 2017, this is a unique find with rewarding world to explore. 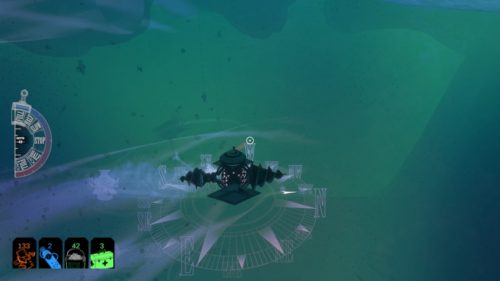 Diluvion sets the player as a submarine commander in a post-apocalyptic world, where sea levels have risen and ice covers the surface of the planet. This confines the player to an entirely aquatic world, exploring murky depths amongst the ruins of the dead civilizations of Earth. As a result, this setting affords the game some beautiful backdrops, with architectural ruins blended beautifully with the aquatic environment. 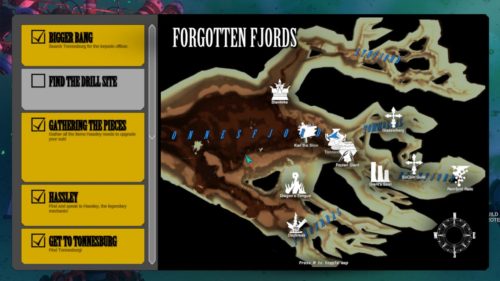 The game is by no means a cake walk. In those murky depths, the player has a flat 2D map and a compass to understand where they are going. Unlike many 3D genres, Diluvion forces the player to explore thoroughly along the vertical axis. Lots of unique finds, and treasures, are hidden in the depths of the world. Important storyline elements are located at the top of the world, clinging to the underside of the ice ceiling. This awesome world-building can unfortunately make gameplay feel tedious at times. Important waypoints are indicated to the player by streams of golden fish. Pretty cool, but sometimes these fish can’t be counted on (not like real fish, am I right?) In the end, it’s worth bumbling around the ocean exploring every nook and cranny. Who knows what you will miss if you don’t explore every cubic inch of the map? 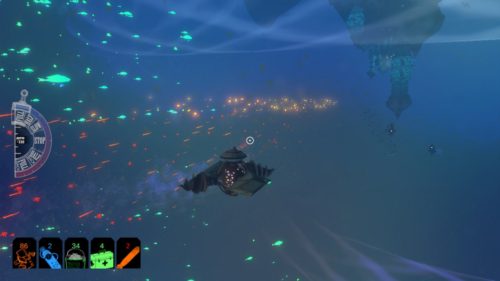 My favorite feature of this game is the engine speed. You will notice on the picture above that speed is not set on a scale of 0-100, but is displayed on an engine order telegraph (I had to google what the heck this device is called, I’m not a nautical genius). The EOT (that’s right, I know the official acronym) keeps it classy. Full speed ahead guv’nor.

My strongest criticism of the game is the roving pirates. At times, you can be bombarded by relentless waves of pirates, for no particular reason. As much as killing pirates and roaming baddies can result in great loot, and discount crew members for your own craft, fighting 5 or 6 in a row can get a little old.

Combat keeps things interesting as navigating in a 3D world gives a lot of opportunity for varied battles. The use of torpedoes can be particularly fun as they make a satisfying underwater explosion. Like torpedoes in real life, a direct hit is not necessary to inflict damage to a target. The concussive wave from such an explosion is what makes depth charges particularly dangerous to real world subs. While this is not a submarine simulator, (read that as, “This game does not replicate any similarity to real submarines, besides being underwater.”) it can still feel very immersive. Directional audio helps determine enemy locations, and brings the environment to life.

The game is a treat to play and explore, but drags along with poor direction given for objectives. My advice is to chill out and enjoy the ride. This isn’t a fast paced shoot-em-up, but a sometimes ponderous journey in a dangerous environ. 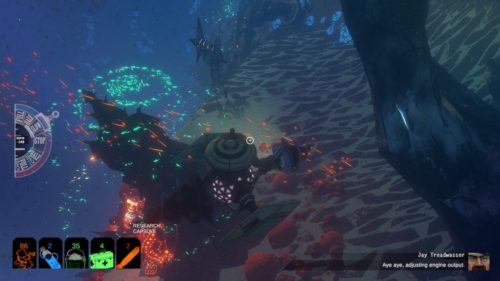 Overall, I give Diluvion a 6/10. It’s a fresh play, with a sweet world. The controls are easy, and mostly intuitive. The camera angles can, at times, be horrendous, ruining tight spaces in the game.

Feel fairly confident to pick this game up. Enjoy the ride, and have a load of fun.

This Diluvion Review was submitted by @HamFiddler who plays games over on Twitch. Stop by and say hi!