Detective Pikachu is out for 3DS/2DS and the new Pokemon title is a bit of a departure from other games in the series. In this Pokemon game, players take on the roles of Detective Pikachu and Tim Goodman, who form an unlikely bond over Tim’s ability to understand Detective Pikachu. This unlikely duo joins together in an attempt to solve various crimes around Ryme City. To help you in your detective work, I’ve thrown together a Detective Pikachu Guide. Below you we will solve the first case, “Figure out where Aipom went.” 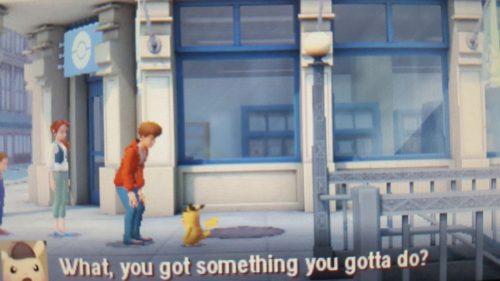 When you start Detective Pikachu, you will watch a brief cutscene featuring Detective Pikachu. In it Detective Pikachu learns he can talk, but quickly comes to the realization that no one understands him. We then get a shot of Tim Goodman, a human who has come to Rime City in order to learn more about his Dad’s mysterious disappearance. These unlikely characters meet and we learn that Tim can understand Detective Pikachu. While this is happening, a couple of Aipom steal a necklace from a girl. Looks like the duo will have to get it back.

After the cutscene is over, you will take control of Tim. Tim can be moved by using the left control stick. There isn’t much you can do at the beginning of this mission besides run to the right, so do that. If you want to talk to people you pass, simply press a to do so. Most of the NPCs have little to say, but offer a bit of background as to what is happening.

Continue walking to the right and eventually you will trigger a QTE. There are three events that occur during this QTE: 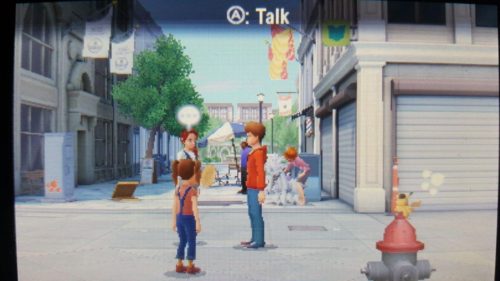 In the first case area, you want to talk to the witnesses to learn what happened.

There are a total of six witnesses we can speak to in this area. Not all witnesses yield particularly useful information, so I’ve bracketed the ones that do. Each bracket is broken down into its corresponding case list section.

That’s all for witness interviews. While we’ve gathered some valuable information (one Aipom ran to the Park; others ran to the Bank), we still don’t know which direction the Aipom that stole the necklace ran. We will need to look around for evidence at the scene. 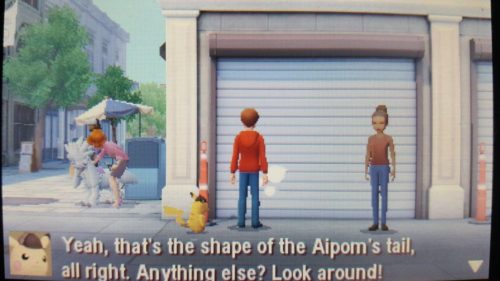 The white tail print is one of two clues in this area that will help you find where Aipom went.

If you think back to the QTE with the Aipom, you will remember them playing with the condiments. One Aipom used Ketchup, while the other used Mayo. This means there are multiple prints around the crime scene. Let’s examine them! 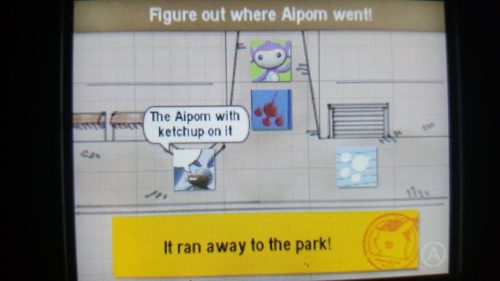 Completing the deduction portion of this case will take you to the next section found in the Park.

Using the evidence we’ve collected, we can determine where the Aipom went. To do this, we need to add the evidence and testimony to the drawing of the scene of the crime. The end result will look like the picture above. We have deduced that the Aipom ran into the Park with the necklace.

The next portion of the guide will help you “find the necklace.”

Thoughts on this Detective Pikachu Guide? Let us know in The Pit below.