One of the more surprising announcements at this years E3, was Resident Evil 7. Showing off this trailer, many people began speculating on what the new game would consist of. Capcom has provided more information on a blog post with Resident Evil 7 producer Masachika Kawata, answering a few concerns people have. Below is a few highlights from the post.

What character(s) do players control in this game?

Kawata-san: Just to confirm – it isn’t an existing character whose eyes you’re seeing through. I think one of the places we got in the series up until now is you’re kind of playing these superhero characters. They’re fully equipped, powerful people who go into these survival horror situations but they’re ready for them. They can take it on. To bring the horror experience right to the player, we thought now that you’re in first person you’ll feel like you’re there. You can’t be looking through the perspective of a macho, hero character because that’s not you at home. Or maybe you are macho, I don’t know [laughs]. It’s sort of a powerless, ordinary person you’re playing as. We’re not really talking in too much detail about who they are right now, but they’re an ordinary person stuck in an extraordinary situation. I think that really brings the horror right to the fore. You wonder if this person you’re playing as – or you – will be able to cope with this situation. That’s a real feeling of helplessness that helps the horror stand out. If you try the demo that’s out on [PlayStation 4] for [PlayStation Plus subscribers], you’ll see.

In your own words, what are the core differences between Resident Evil 7 and previous games in the series?

Nakanishi-san: The demo, just to be clear, isn’t a slice of the game. We really want to focus on what concepts we want players to understand about the game with the demo, and that’s horror. This is a tonal preview of what to expect in the game, rather than a little bit of game content you’re getting in advance. In the 20 year history of Resident Evil, you know that the key pillars of the game are fear and horror, exploration of the environment, puzzle-solving elements, resource management, and combat against enemies. Those are all in this game, but we wanted to start off with the first two – horror and exploration – and get you experiencing those two pillars up front. If you’re thinking that because those other elements aren’t in the demo, that they won’t be in the game, that’s not the case. We’re focusing up front about the message of horror coming home in this demo.

Looking back at the history of the series and thinking “How do we get people playing today to experience the same fear that they felt in 1996 with the first game? How do we bring that up to date and bring that emotion back?” That question and the answer is what led us to make the gameplay system as you see in the demo. 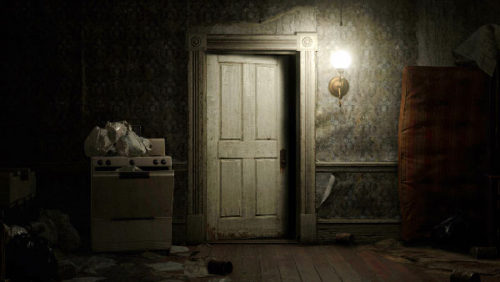 Nakanishi-san: It’s not a reboot and we’re not throwing away the series’ canonical storyline. It’s the new numbered title in the series and it’s a sequel to the existing mainline series titles. After I say that and you try the demo, you may say “Really?”, because it looks nothing like any of that, but trust me. We need to have a bit of mystery in survival horror, so we’re trying to make you wonder when you play it how could this possibly be connected? That’s part of the appeal.

Would you like to deliver a special message to the fans following the reveal of RE7 (Resident Evil 7)?

Nakanishi-san: I want to give a reassuring message. I’ve seen from initial reactions of what we’ve put out that people are getting the impression that we’ve taken Resident Evil and turned it into some sort of supernatural, occult, ghost story. I think you can look at the trailer or the demo and get that impression, but don’t worry, we haven’t just thrown out Resident Evil as it exists and turned it into a ghost story. It will all make sense in the end. I know it’s frustrating holding back on what we can show fans, but this is really the best way to let you enjoy the game to the fullest when it finally comes out. We just have a trailer and a demo at this moment, but watch this space in the coming months and we hope you look forward to the game. We’re going to do our best to make the best game we can.

Were you excited by the demo and new look? Let me know in the Pit below.