Dark Souls 3 Ashes of Ariandel, the recent DLC adds two new boss fights for players to conquer. The first, an optional fight, the Champion’s Gravetender and Gravetender Greatwolf was relatively easy to take down and had me wondering where the real challenge would be. In typical Dark Souls fashion the best (and hardest) is saved for last. When I finally made it back to Ariandel’s Chapel having activated the switch in bug hell, I had no idea what I lay ahead of me. The Sister Friede fight is one of the more challenging fights in Dark Souls 3. What follows is my Sister Friede boss fight walkthrough. Before we dive in, make note that the Sister Friede fight is a three phase fight, so prepare for a long fight. 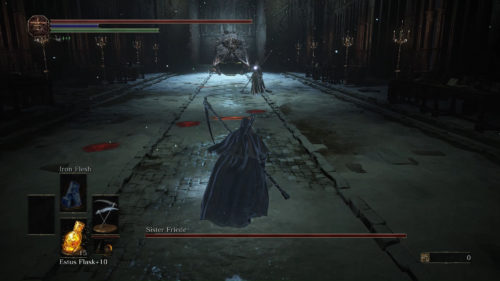 Upon entering the lower depths of Ariandel’s Chapel, you will see a large hulking figure leaning over what looks like a Lord Vessel. This character is Ariandel, the one responsible for the Painted World you are visiting. Ariandel, fearing the return of the flame, wants Friede to bring him his flail so he can shed his blood and hold off the flame. Friede has other plans and instead brings a large scythe, to use on you instead. This triggers phase 1 of the Sister Friede fight.

Phase 1 consists of going 1v1 with Sister Friede. Sister Friede wields a scythe which has a crazy reach. Moveset wise, Friede has a few to choose from. Friede has a few spin moves, a leap attack as well as the use frost bolts and frostbite attacks. These attack can be dodged with rolls or a decent shield. What you really want to watch out for is when Friede turns invisible. When Friede turns invisible, she will either jump or run. Listen for the sound of her crashing into furniture. When you hear that sound, run towards it. If you reach her in time, Friede will become visible and is susceptible to damage. 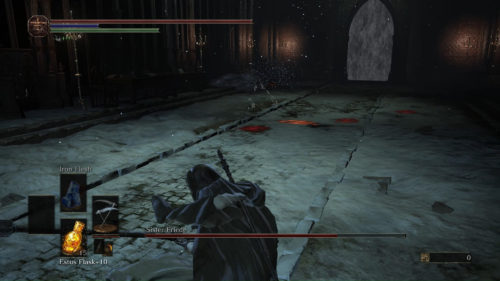 MAKE SURE YOU FIND FRIEDE WHEN SHE IS INVISIBLE. This is the biggest advice I can give you. If you don’t, her attack coming out of invisibility is a hug damage dealer. Keep an eye on your estus usage as well. Aim for only 1-2 used, as this boss fight is a war of attrition. Also keep in mind that Friede has low poise and can be backstabbed, so dump the damage on her. Once you defeat Sister Friede in phase 1, it will trigger a cutscene which brings Father Ariandel into the fight. Do not panic, while there are now two enemies to face, this is the easier portion of the Sister Friede boss fight. 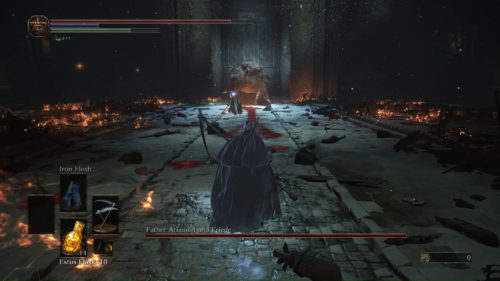 Phase 2 introduces a new enemy to the fray in Father Ariandel. This large, lumbering man carries around a bowl of estus soup and is not opposed to smashing you to death with it. The biggest pointer I can give for phase 2 is patience. Patience is key in getting through this phase. I tend to target Father Ariandel during this phase as he seems to take more damage then Sister Friede.

Father Ariandel has a few moves he utilizes. He has a charge where he smashes his Lord Vessel four times while moving across the room towards you. Once the Lord Vessel has been smashed four times, he will become tired and pause to rest. I found that I could safely get one or two hits in and retreat. Trying to get more attacks in usually led to getting hit.

When you are near Father Ariandel, he will attempt to either vertically smash the Lord Vessel on you or swing it in a horizontal fashion. I find the hit boxes on these moves to be rather jankie, so staying clear is the best tactic. Father Ariandel also has an area of effect move, where he flips the Lord Vessel over and spills its content all around him. The last move to watch out for is flame breath he uses. This has a windup indicator and can either be out distanced or simply out ran. 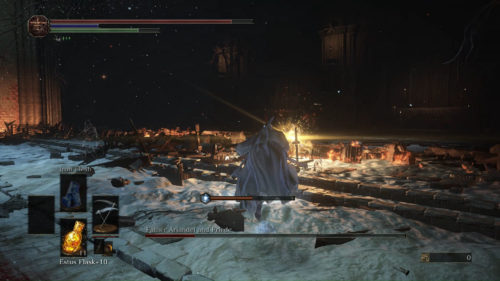 During the time you are fighting Father Ariandel, keep in mind that Sister Friede is still alive and running around the room. Note that she becomes far less aggressive during phase 2. The easiest way to deal with Sister Friede during this phase, is keep your distance. This causes Friede to use her ranged attack, which is basically sending ice in a line towards you. This attack can be a bit tricky to deal with as it can Frostbite you rather quickly. As soon as she sends the attack out roll or run out of the attacks area. If you do get close to Friede, her moveset is the same as Phase 1, which is manageable, but ideally keep your distance. Intermittently throughout the fight, Friede will disappear and reappear to heal Father Ariandel. When this happens, simply interrupt the healing by attacking Friede.

This phase is somewhat weird in that the easiest way to win is by being patient and keeping your distance. Attack Father Ariandel when the window of oppurtunity presents itself, then retreat, focus on dodging and repeat. This makes the fight pretty manageable. Killing Father Ariandel will have you rejoicing, thinking the fight is done. Unfortunately there is still one more phase. 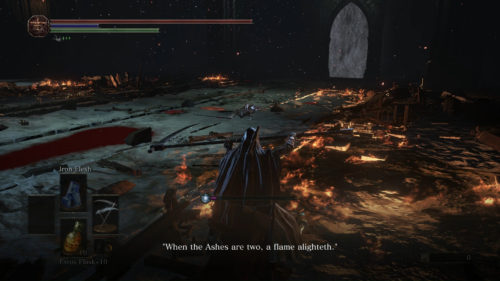 The good news about phase 3? Father Ariandel is gone. The bad? Sister Friede returns as Blackflame Friede, basically a steroid infused version of phase 1. Blackflame Friede wields to scythes this time around. The one is frost imbued while the other has Blackflame on it. The sycthes together hit hard and can easily one shot you if you fall to a combo. However much of the moves Blackflame Friede uses are similar to phase 1. A couple of new moves are added that you should be aware of however. 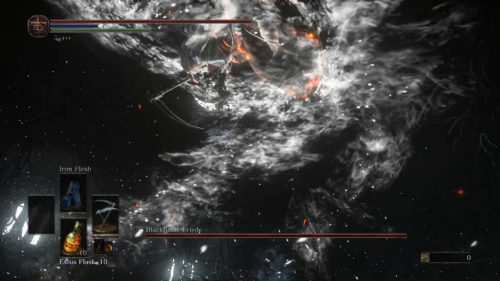 This right here is basically death

Move one basically sees Blackflame Friede launch into the air and shockwave the ground. When this happens run under Blackflame Friede and try to get a backstab when she comes back to earth. Blackflame Friede also has a new ranged attack which send Blackflame at you. These can be rolled or ran away from. Basically treat this fight similar to phase 1 and you will be able to win just fine.

This boss fight is kind of weird to describe, so watch me fight Friede as Friede!

What did you think of the Sister Friede Boss Fight? Any tips? Let me know in the Pit below.