Last week, From Software teased about an announcement coming August 24th regarding Dark Souls 3 DLC. The announcement now appears to have been leaked ahead of the ‘official announcement’ tomorrow. According to Japanese news outlet Hachima, Dark Souls 3‘s upcoming DLC, entitled “Ashes of Ariandel”  will be available October 26th. A now deleted tweet from Playstation appears to confirm this rumour. Interestingly, the tweet links to a trailer, which was not live, but appears to be what we will receive tomorrow. 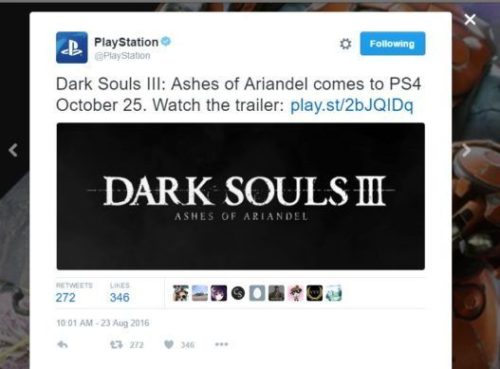 Hachima divulged a few more details regarding the new Ashes of Ariandel DLC, mentioning new weapons, magic and an area devoted solely to PvP called Immortal Competition. While this leak remains largely rumor, players only have to wait until tomorrow to hear officially from From Software regarding their DLC announcement.

It has now been officially confirmed that Dark Souls 3 DLC Ashes of Ariandel DLC is coming October 26th. Alongside the official From Software announcement has come a trailer. In typical Souls fashion not a whole lot is shown, however we do get to see some new magic, bosses and characters. The environment gives me a sort of Crown of the Ivory King vibe, but that is simply from first glance.

If you are entering NG+ let me help you

Excited for the new Dark Souls 3 DLC? Let me know in the Pit below.