What is That? Cuphead Combines Old Timey Cartoons With Difficult Gameplay

Cuphead. For the past few years, you have probably heard the name of StudioMDHR’s upcoming game. Well, Cuphead‘s release is finally in sight as we enter September. Slated to launch on September 29th, Cuphead is an indie, old timey cartoon, twin stick shooter that has me officially hyped. Let’s take a closer look at Cuphead, shall we? 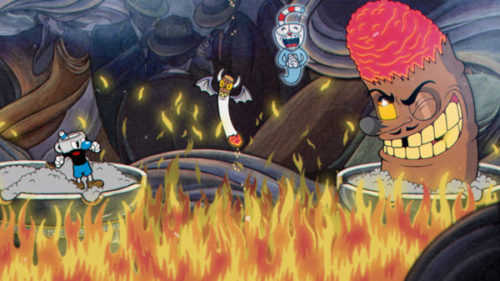 Cuphead is the first game from StudioMDHR and has been in development since 2010. Aiming to capture the vibe of 1930s cartoons, the game utilized similar animation techniques to those practiced in the 30s. Alongside the interesting animation, Cuphead also aims to capture the difficulty of retro gaming through its core gameplay mechanics of running and gunning. As the official Cuphead site explains:

Cuphead is a classic run and gun action game heavily focused on boss battles. Inspired by cartoons of the 1930s, the visuals and audio are painstakingly created with the same techniques of the era, i.e. traditional hand drawn cel animation, watercolor backgrounds, and original jazz recordings.

Play as Cuphead or Mugman (in single player or local co-op) as you traverse strange worlds, acquire new weapons, learn powerful super moves, and discover hidden secrets while you try to pay your debt back to the devil!

Cuphead has been on my radar since 2012 and I can say that I’m excited for the game to release. Everything about the game is appealing to me. Nice aesthetics? Check. Tough gameplay? Check. Boss battles? Check. Combining all these things into an indie title is simply a recipe for success to me. I will be picking up Cuphead at the end of the month.

What do you think of Cuphead? Let me know in the Pit below.