Home » Gaming News » What is That? Comedy Night Wants to Make You A Comedian

What is That? Comedy Night Wants to Make You A Comedian 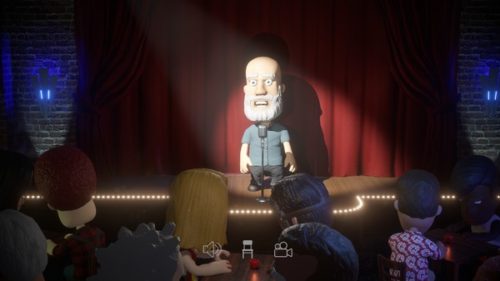 Starting life as an Xbox 360 indie title, Comedy Night was first released back in 2012. Now, some five years let, Comedy Night is making its way onto the PC via Steam. But, what exactly is Comedy Night? As the Steam Store states:

Do you have the talent to face off against other comedians in a live comedy show contest. See how your material holds up in the face of brutal audience members who can vote you off or the relentless smack talk from other performers.

Perform in-front of a live audience as a individual or go head to head with another performer. If you are an aspiring comedian this is a great sandbox to try out new material and perfect your show.

Be be part of the audience and decide which performers stay or go by voting them off the stage. Heckle players or encourage them as they do there best to entertain you.

Players have full control over custom avatars as they use different styles and animations to enhance the performance.

Basically you play a comedian on stage at a comedy club. Other players sit in the audience and judge your performance. Audience members can heckle or encourage comedians and ultimately decide who gets to remain on stage.

While I don’t personally see myself ever getting on stage in Comedy Night, I am intrigued to see how the audience system works. Given the notorious nature of online games, I feel like this sort of gameplay is ripe for trolls and dream crushers. With that being said I would gladly sit in the audience and throw rotten tomatoes at people alongside my fellow degenerates.

As of now, the game has no official release date, but says August 2017.

What are your thoughts on Comedy Night? Let me know in The Pit below.