When I started playing last week, I really wanted to try to give Arkham City a serious play through. I was thinking back to the days when I would just crush games out (to the best of my abilities) and just had a ton of fun gaming. That meant sitting down for some longer sessions, and becoming invested in the game, more than I have been for the last few weeks. Arkham City  is a game that I have heard a lot about, so I started it with some knowledge of what I was getting into. Now, a week into the game, I feel somewhat conflicted regarding what I think of the game. This week I am going to try and iron everything out, starch it up, and get a well pressed opinion out into the world.

My history with the Batman isn’t exactly glowing. I enjoy, though am hardly a super fan, of the 60s the Batman, and I enjoy Nolan’s version of the Batman in The Dark Knight and Dark Knight Rises. Apart from these examples, the Batman doesn’t really do anything for me. Burton’s Batman films annoy me. Schumaker’s Batman films repulse me. Batman Begins just isn’t that good of a film. I’ve also dipped my toe into some of the comics, checking out the usual suspects like The Dark Knight Returns and The Killing Joke, but for the most part I feel pretty distant from the character.

The first thing I noticed when I started playing last Monday, and the thing that really stood out to me when I did my session today, is that Arkham City’s the Batman is a real blockhead. All his dialogue is delivered in the most apathetic way, and this coupled with the terrible writing is annoying, to put it politely. The Batman just walks around not caring about anyone, and being way over confident in his own abilities. There was a point today, where I was trying to find The Joker, but ended up going and saving some doctor from being burnt alive in a smelter, and once I saved her, the Batman was like “I’ve wasted enough time saving her, time to find The Joker” (or something like that). Talk about an apathetic L-7 Weenie. It is like the Batman in this game is being the billionaire Bruce Wayne persona, except not in a cool, I am taking three women out on a date, and swimming in a fountain, kind of way.

I ended my session today with the Batman getting out smarted by The Joker, in a very obvious way, and then the game switches to you playing Catwoman. I think that the controls for Catwoman are way more enjoyable, and everything just works better, given that her animation is much fast than the Batman’s is. I think I am playing the wrong game…

I know what the best thing about the game is, and it’s is something that I have gone back and forth on since I started playing. The combat in the game, particularly combat involving a horde of baddies, is by far this games best mechanic. At first I felt like it held your hand too much, and that it was just button mashing, but with the upgrades in skills, the fighting is immensely enjoyable. Furthermore, the combat is the closest thing to what I associate with being the Batman, that Arkham City has going for it. The combat is all about dropping into a group of baddies, and seamlessly dispatching them, in a beautifully choreographed, but still very hard hitting, way. The tying of moves together, makes the fighting just flow so well, and the controls, while somewhat simple, are still very satisfying. Timing the button so that you can counter one baddie’s attack, whilst you are beating the pulp out of another baddie, is satisfying. The further I have gotten into the game, the more moves that I have unlocked, and while the whole upgrading thing is something I generally consider being for the birds, I am happy to have more moves to add to the combat in Arkham City.

As for the game itself, it feels a bit repetitive so far. Basically you have to find a major baddie like The Joker, or Mr. Freeze, and then you have to infiltrate their lair, and the game becomes level based. Then you beat the lair, and it is back into the city to wander around until you find the next major baddie. 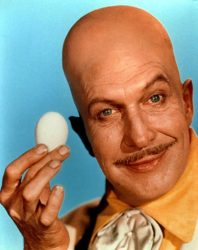 Hopefully Egghead will make an appearance…

So I think it has been established by previous entries of The Challenge that I am not the brightest bulb in the tool shed. I am not saying that I need a game to hold my hand, but I do like it to at least be somewhat obvious where I am supposed to go, and what I am supposed to do. Arkham City is not a game that makes your path obvious, and this has resulted in some frustration on my end. So I am trying to get into a building in order to find Mr. Freeze. I have followed the temperature thing to the right building, but I have spent like twenty minutes trying to figure out how to get into the building. I killed a bunch of baddies, and then I could find no other clue about where I needed to go. I end up encountering some random NPC who I could interact with, and he tells me that Mr. Freeze is in the building and to watch out for the baddies, the ones that I already took care of. This here is a fundamental flaw of Arkham City. Unless you interact with things in a proper order, or follow the path the game wants you to follow, you are going to miss some stuff. I have encountered this before in the game, where I took a different path, and didn’t engage a hint or voiceover that told me what to do, so I ran around like a chicken in a Werner Herzog film until I randomly stumbled upon the path that engages the hint. I know that Arkham City is not an open world game, but the illusion that it is an open world game really throws me off sometime. I think that I just have to complete a mission, but I actually have to complete a mission in the way that the game wants me to.

Back to getting into Mr. Freezes lair. I just ended up looking up how to do it on a walkthrough, and discovered that there was a door I had missed, that I needed to use my electro gun on to open up and get inside. I dispersed a couple baddies on the inside, and once again had no idea where to go, so I just turned the game off. 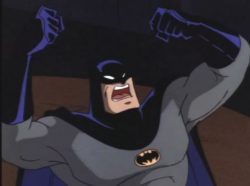 WHAT AM I DOING WITH MY LIFE?

Jumped on for what I intended to be a pretty long gaming session today, and then the game was just a slog from the very first minute. I pretty much need a walk through to do anything in this game, and this makes playing it not fun at all. The map system in the game isn’t very intuitive, and is pretty much non-existent, except when I am tracing some signal, for the millionth time. In the grand scheme of the game, I haven’t really even put a dent into the game, but I already find it to be repetitive. Like, repetitive to the highest degree possible.

In some ways, Arkham City is an allegorical representation of life. All the game is, is monotony and repetition. Every time I start up the game for a session, I know that I will be slogging through the same actions that I did the last time. Major enemies that I encounter are pretty much just re-skined versions of the last big baddie that I encountered, and the challenges that this baddie provides, are the same challenges that I have faced before. Life has a way of being a lot like this, just waking up, sloging through the workday, and facing the same repetitive challenges over and over, until we are dead.

Arkham City is a grind. I really haven’t even played that much of the game, and I feel the grind baring down on me. I definitely see how some people would enjoy this type of experience, but for myself, I am just much too aware of the on rails aspect of the game, as well as the repetitive nature of things. I feel like I gave the game a fair enough shake to say that it isn’t for me.

The Controls during fighting

Enrico is in the building

*I ask him face to face*

If this isn’t better than Wallace and Gromit…it’s going to be a long week.