After the failure last week, I am here this week to give you 100% commitment to play this game, whatever it is. My assumption is that I must have gotten this game in some Humble Bundle, as I don’t recall purchasing it. So I loaded it up at about midnight, and decided I might as well jump on for a quick session. What it seems like is that Aquaria is an aquatic platformer (basically it is the water level of any given platformer, just that the whole game is that). I can probably think of a better classification than aquatic platformer….hmmm….swimmer…stroker. Anyway, so Aquaria is a swimmer, where you play a fish girl who talks with a British accent. There seems to be some magical stuff going on, and you can sing different tunes, by selecting colours. You can navigate the game by simply using the mouse, with left click giving you a boost swim, and right click letting you sing. So far all that I have done is just swim around, and the controls seems pretty smooth.

Jumped on for a second session later in the day, and I encountered some shadowy figure who sent me to a hellish underwater world where I was on fire, and there were tons of baddies who pretty much killed me instantly. Dying was the point apparently, as I got back to the regular game, the shadowy figure disappeared, and I moved on. So far I have no idea what I am doing. I expected that this would be a level based game, but it seems like it might be a single world with different parts that I have to explore.

Jumped on for a twenty or so minute session today. I swam around, and found something, that told me about something else, but I am not really sure what it has to do with anything. I honestly have no idea what I am supposed to be doing in this game, so all I am doing is just swimming around. The map I found to be confusing at first, but then I realized it is basically a dungeon map, showing me the path through the part of the world that I am in, and it changes when I move to a different part of the world. There was a golden glow on the map, so I swam my character to it, and it turns out it was my home (I guess) and there I can cook soup and make other food with stuff that I picked up. I couldn’t figure out how to combine items to make food, or the logic of eating soup underwater, so I just left and swam around some more.

Michael Phelps with insane gold. I train for it.

So here I am…still swimming, and not finding out anything regarding what I am supposed to be doing. It appears that I have swam over the entire map, and I have found absolutely nothing. By the end of my session today, I have played for just over an hour, and have accomplished zilch. I am so tempted to find a walkthrough, but I kind of want to see if I can figure it out, or if just swimming around will be my entire week. Tune in tomorrow to find out more…

If I just keep swimming…I’m worried about how this week is going to end.

So, did a half hour session today, and I did not advance any further. I found some treasure, which apparently spruces up my home part of the map, and I learned how to cook. I made some soup, and I made some vegetable rolls, and this was the extent of what I accomplished. As far as I can tell, I swam around the entire map again, and still nothing. I went to a place where there is this station of some dude’s face, and you hear a laugh, but then nothing else happens. I went to multiple rooms where it appears like something important will eventually happen, but nothing has happened so far. All I am doing is swimming, and that is it.

What appears to be the biggest downfall of the game is the map design. In the main world the map has all these pulsating circles on it, marking doorways into other parts of the world. There is only one that looks different, it’s gold, and this is the doorway to your home base. In your home base, as well as one other corridor, there is a red pulsating circle, and this is a save point. My thinking was that since I have only encountered one other save point, than this part of the world must be where I am supposed to be, so I explored the area thoroughly, but found nothing. It’s getting to the point where I am thinking that this game is just a patience test, and that all the swimming I am doing is supposed to be character developing. Either that, or I have clearly missed something, and I am slowly drifting into madness with all the repetitive swimming. 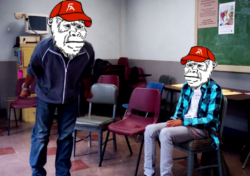 Not sure If I am Troy or Abed at the moment…

Another day spent swimming around and accomplishing nothing. There were a couple moments where I thought I had cracked the case of the I Can’t Figure Out What I Am Supposed To Do, but alas these moments were just dead ends. I realized that there were points of interaction that I missed, so I interacted with these points. The first was a statue, and I got a flash of a doorway near by when I interacted with it. I got excited, thinking this was the clue I needed, but when I got to the door, there was nothing I could do with it. The other interactions that I encountered were a rock, and when I interacted with it I could sit on the rock, and a bed. The bed let you sleep in it, and you get flashes of stuff, like a dream, but I couldn’t discern anything from the dream. And, that is all that I accomplished today, after playing for a half hour.

The point I am reaching now is that this game sucks. I might be the problem, admittedly, as I ain’t the smartest tool in the water closet, but I have to make this a knock against the game. The fact that I have no idea what I am supposed to be doing, means that the games introduction is a complete failure. I should have at least some inkling of what my objective is, but no, I just got thrown into the game, so all I have been doing is swimming around, trying to figure out what the cuss is going on. If just finding out what you are supposed to do in a game is a challenge, than the game is a failure.

I watched Heavyweights instead…

In summation, whether it be my fault, or the fault of the game, I got absolutely nowhere with Aquaria. The controls and art style of the game suggest it is a decent game, but with no idea what to do, this game is a complete failure for me. I am looking forward to deleting this from my Steam library, and never playing it again.

No idea what the cuss I am supposed to be doing in the game.

Waste of my time

Expect a lot of jokes about nipples on the bat suit next week.

You dropped something…it’s in the pit below. Might as well leave a comment while you are down there.