Disney, the current kings of Hollywood faced a rare bump in the road this holiday weekend with the release of Solo: A Star Wars Story coming in below box office estimates. The newest Star Wars offering, directed by Ron Howard, brought in roughly $103 million domestically over the holiday long weekend, which was well below the $150 million Disney had been projecting. 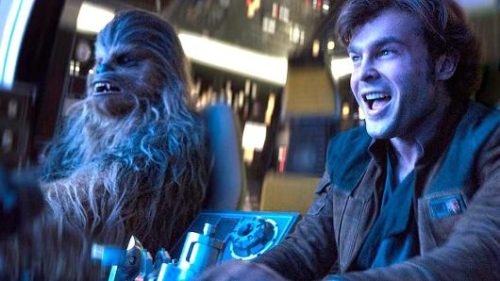 Chewie get us outta here. Solo: A Star Wars Story disappoints at the box office.

Coming in second to Solo: A Star Wars Story was Deadpool 2 which continues to maintain a strong box office position. This week’s haul was $43 million domestically which is a drop of 65% from opening weekend. Including international numbers, Deadpool 2 is closing in on $500 million worldwide, which isn’t bad for a movie that had a budget of $110 million.

Rounding out the top three is another Disney offering, Avengers: Infinity Warfare. This mega-movie continues to perform well in theatres with this weeks domestic haul being $17 million. Worldwide, Avenger: Infinity Warfare is sitting at $1.9 billion in sales which puts it fourth on the All Time Worldwide Box Office List.

For a complete look at the top ten films this weekend, check out the list below.

Thoughts on this week’s box office numbers? See any of the films listed in the top ten? Let me know in The Pit below.