This domestic number came in just shy of expectations as Rampage was pegged at having between a $35M – $40M opening weekend. With that being said, the film delivered on an international level, earning approximately $114.1 million outside of North America, bringing the film’s global earnings to $148.6 million. 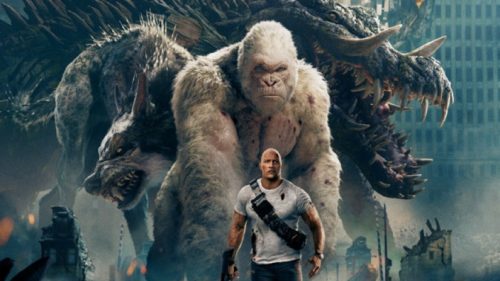 Besides Rampage, A Quiet Place continued to surpass expectations again this week. The film, which had a reported budget of $17 million, brought in an estimated $32.6 million haul over the weekend. This amount represents a decrease of only 34% from opening weekend. The John Krasinski directed horror film is closing in on the $100 million mark in just ten days of being released. Not bad at all.

Rounding out the top three is Blumhouse’s new horror film, Truth or Dare. Directed by Jeff Wadlow, the film brought in an estimated $19.1 million during its opening weekend. In typical Blumhouse fashion, Truth or Dare brought in an incredible return on investment for the studio, as the film budget was under $5 million.

Thoughts on this week’s box office numbers? See any of the films listed in the top ten? Let me know in The Pit below.