I logged onto Netflix today with the intention of watching Brad Pitt’s new War Machine, but instead ended up watching Blame!. Watching this anime was not really planned, but it’s been awhile since I weebed up, so here we are. Is the Blame! Netflix anime any good? Check out my Blame! Netflix anime review below!

Prior to accessing Netflix, I had never heard of, nor seen anything about Blame! After doing a bit of research, I learned that Blame! is a ten-volume 1998 Japanese science fiction manga by Tsutomu Nihei. Since 1998, Blame! was made into an animated series in 2007, and now more recently into a feature film by Netflix.

Blame! tells the story of a civilization that has reached its ultimate Net-based form. Unfortunately, an infection causes the civilization’s automated systems to spiral out of order and results in the humans losing both access and control to the systems they’ve created. As the humans lose control, they begin are hunted down by a defense protocol called the Safeguard, which forces the humans into hiding. 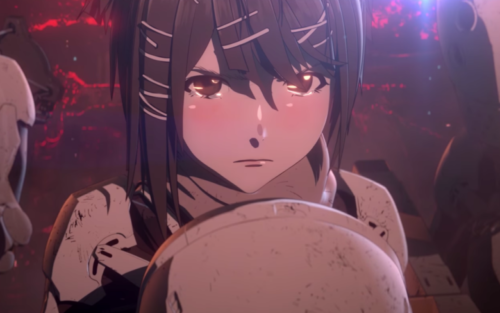 With that as the backdrop, Blame! follows character Zuru who is a member of the Electro – Fishers (a band of human survivors). Facing threat from the Safeguard and dwindling food supplies, Zuru heads deeper into the city in hopes of finding food supplies. This leads to an attack by the Safeguard who destroys most of the group travelling with Zuru. Zuru survives through the intervention of Killy the Wanderer. Killy is on a quest for the Net Terminal Genes, the key to restoring order to the world. Zuru accompanies Killy in his quest to save humankind.

The story in Blame! is pretty good.

Overall, Blame! tells an interesting and compelling story about the rise and decimation of humans at the hands of the technologies they created. Blame!‘s story is especially interesting given society’s current interest in advancing both AI and Automation. This message becomes ever more poignant as we learn more about who Killy really is.

One thing, I noticed  is that Blame! is rather heavy on exposition, which is welcome for people like me who haven’t read the manga, but I could see fans being a bit bored with how much everything is explained. This approach could turn you off if you don’t want the movie to explain every little detail to you as you watch.

I don’t normally watch the dubbed versions of animes, but always seem to end up watching the dubs on Netflix. The dub of Blame! is pretty good overall, there are a few instances where the acting is kind of flat. Cibo in particular didn’t work for me, but as a whole I think the dub here is decent .

While the dub is pretty good, I found the writing to just be okay. Some of the interactions between Zuru and Killy just aren’t written all that well. This is kind of a bummer as these two characters carry the brunt of the film, so fleshing out their interaction would’ve been welcome.

There’s not much to write on in terms of sound. There’s very minimal music in BLAME!, but what is present is largely atmospheric. This works well enough, but is just kind of there when needed. I looked up the OST and found it to be really good, but it didn’t quite translate to me while watching. BLAME!’s sound effects are also pretty standard and work well enough. Overall, I found the sound design to be neither amazing nor bad, it simply got the job done.

I’m rather particular in what I’ll watch in terms of anime. If the look of the film doesn’t catch my attention, I usually won’t watch it. Luckily Blame! has a really interesting and unique look to it. This look, combined with the sci-fi, dystopian setting, worked well for me and was a joy to watch. I especially liked the look of all the characters as wells as the Electro – Fishers armor sets. The armor reminded me of a cross between Star Wars and NieR: Automata which is pretty hip.

Backgrounds didn’t do much for me.

Unlike the character design and armor sets, I found the location art to be a touch lacking. None of the places they visit are all that notable in design and probably won’t be all that memorable to you. In some ways I get that this is part of the world the characters live in, but I would have liked to see a more interesting surroundings.

This right here is my jam!

The action in Blame! centers largely around gunfights. These fights are pretty good for the most part. There is a surprising amount of gore and blood, which I was not expecting, but added a realistic weight to every fight. Most fights play out rather standard, but the end faceoff is pretty awesome and had me dancing a bit. Something about female machines with huge guns just does that to me.

Overall, Blame! is a solid sci-fi anime with a beautiful artstyle and enough action to make the movie interesting to watch. There is an interesting story here that many will find interesting, especially given the current times we are living in. Where I found Blame! stumbled was in the sound design as well as the design of the world it’s set in. These didn’t really ruin the experience, but left me wanting a touch more out of Blame!. If you are looking to peep a new Sci – Fi anime, Blame! is a no brainer. Watch it and enjoy!

What did you think of my Blame! Netflix anime review? Let me know in the Pit below!