Lazy Bear Games new medieval graveyard management simulator, Graveyard Keeper, is finally out. As the title suggests, the game places you in the role of of a graveyard keeper who is tasked with growing the graveyard into a prosperous business venture. While this may seem like a simple concept, Graveyard Keeper is anything but. There are a ton of systems at play in the game and many of them can be a bit confusing for a beginner. To help you get started use the beginner tips for Graveyard Keeper below. Happy digging! 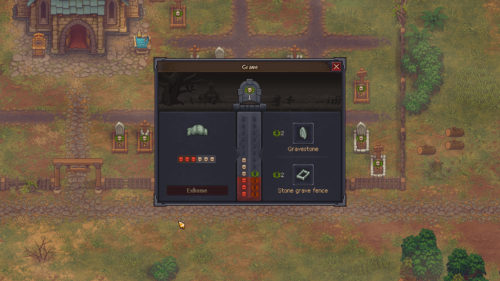 The max value possible from this corpse is +3.

A major component of Graveyard Keeper is burying fresh corpses in the graveyard. These corpses are brought to you by a trusty donkey who delivers them periodically. When a fresh corpse is delivered take it inside your Morgue as soon as possible to avoid corpse decay. In the morgue you can house the bodies on pallets or the autopsy table to stave off decay for an extended period of time.

While you have bodies in the morgue, it is best to examine them (via the autopsy table) for their corpse rating. Each corpse has its own rating. This is the maximum value the corpse can deliver to the value of the graveyard. To check a corpses rating, put it on the autopsy table. On the autopsy screen you will see skulls. White skulls are good and red skulls are bad (green skulls act like red skulls). Let’s take a closer look at each skull type:

Keep in mind that most corpses have a mix of both red and white skull, so it will be up to you to determine optimal placements. Also note that red skulls take precedent over white skulls and must be nullified first. By this I mean a corpse with -2/+2 will need +4 in grave enhancements to reach +2 benefit to the graveyard.

If you want to dive even further into corpse ratings, this guide by Steam user Rayune is a really good read. 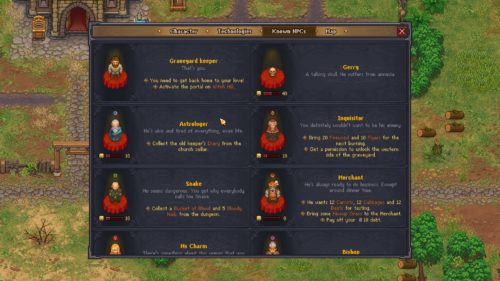 The Known NPC screen is very useful. Consult it often to keep track of what you have on the go.

Graveyard Keeper throws a ton of information at you with little to know info on where all the information is being stored. Things like NPC days and NPC quests come up in conversation, but seem to fade into the background quite quickly. With that being said, there is a way to see all this information and it is called the Known NPCs screen. This screen can be accessed from the main set of menus and should be consulted frequently. On the Known NPC screen you can see valuable information like your friendship rating, what day an NPC can be visited (little icon over head), and what quests you have active with them. 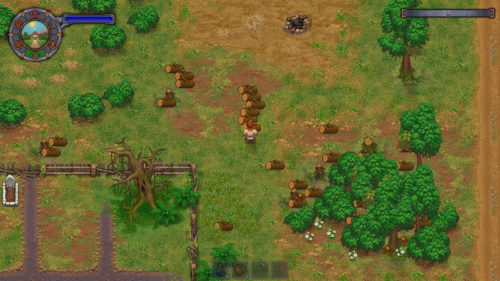 By pushing materials with your character, you can create a sort of train which can cut down on trip time.

In Graveyard Keeper you are required to gather copious amounts of resources in order to building items and advance. While out collecting resources you’ve probably ran into some large logs and granite pieces which must be carried back. Unfortunately you are only capable of carrying one piece at a time which makes the process fairly slow. With that said, there is a bit of a cheese work around you can use to speed things up a bit. Basically all you need to do is push the material with your character by walking into it. Moving materials this way can save a lot of time.

Expect the Donkey to Stop Working 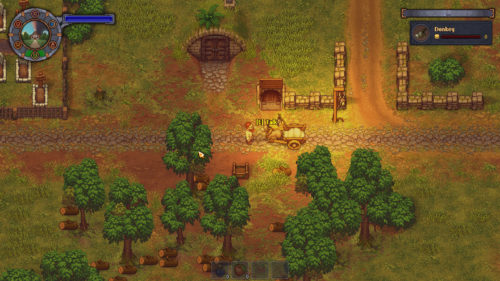 The Donkey will eventually go on strike until its demands are met.

The Donkey is easily one of the more frustrating points of Graveyard Keeper. Unlike other farming/management type simulators where you have control of resources from end to end, Graveyard Keeper puts the flow of corpses in the hands of a socialist Donkey. Since the Donkey doesn’t like being overworked, it will eventually stop working and make some demands. Be prepared for this in advance so your gravy train of corpses doesn’t come to a screeching halt. The Donkey will demand Oil for its cart’s wheels and 10 Carrots. Try to have these items on hand before things grind to a halt to keep the corpses (and money) coming in. If you can’t deliver these items, the Donkey will stay on strike until you do.

Note: Oil can be purchased from the crazy guy to the east of town and carrots can be bought, or grown in the Garden.

There are Shortcuts Under Your House 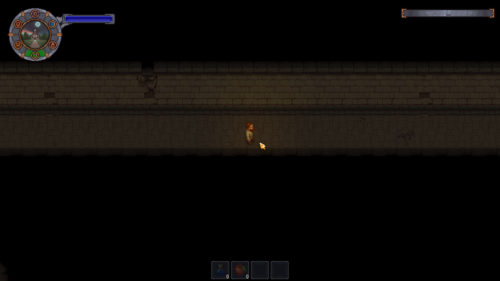 This shortcut leads to Town. Unlock it to shave some time off your journey.

If walking to places seems a bit long, I have some good news for you. Under your house there are a couple of beneficial shortcuts you can unlock that go to areas like the Morgue, the Church, and even the Town. Unfortunately for you these unlocks require a fair bit of resource and technological grinding, but try to remember they are there to be used later!

Update: As of Ver. 1.023 on Steam, players can now but a Teleport Stone from the Tavern Keeper for 2 Silver. This item can teleport you to the Dead Horse or your Farm. Very useful for getting around quickly. 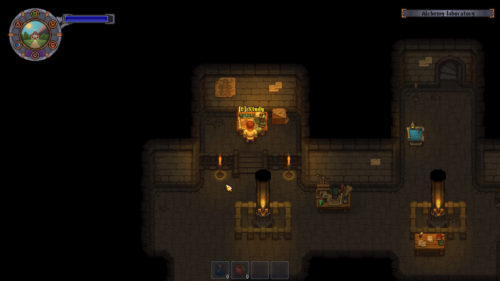 Beneath the Church is a study table. This can be used to earn blue points.

There are three tips of experience points you can earn in Graveyard Keeper (red,green,blue). All three types of experience are acquired by doing things in the world. When you start out in the game you will notice an abundance of red and green points, but no blue points. To get blue points you need to unlock the ability to Study in the church basement. The church is unlocked by completing the first task from the Bishop (making the graveyard better). Once you have the church unlocked you can access its basement and use the study table. At the study table you can study various items to learn about them and earn xp. Certain items (like body parts) give a ton of Blue Points and should be used to gather these points quickly.

Have more beginner tips for Graveyard Keeper? Drop them in The Pit below.