Gearbox’s Battleborn struggled to find it’s footing in the PvE portion of the game, but I haven’t written off the game just yet as there is a whole PvP portion to explore. Before we jump in on my experience with the game I will give a brief overview on Battelborn PvP. The PvP side of Battleborn consists of three game types: Capture, Incursion and Meltdown. Capture is a basically a domination-style mode. Incursion is similar to typical MOBA fare, in that each team needs to push minion waves in hopes of destroying the other teams spider like mechs (think towers). The last mode is similar to Incursion, but focuses on protecting your minion wave until they can sacrifice themselves to the Battleborn gods. It is nice to see Gearbox putting a new spin on many typical MOBA tropes within these modes. In typical MOBA fashion, each mode pits teams of five players against each other. 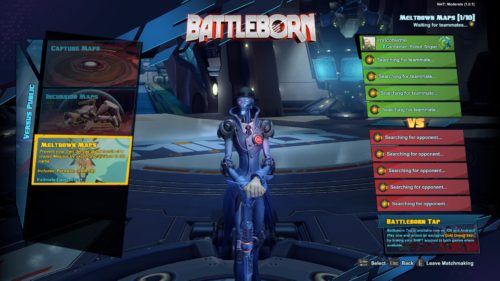 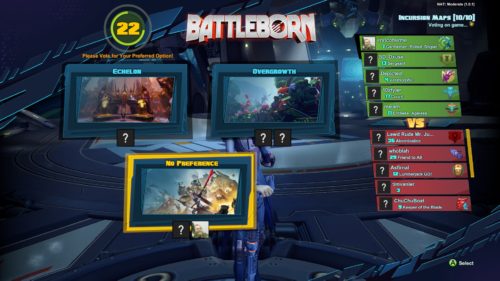 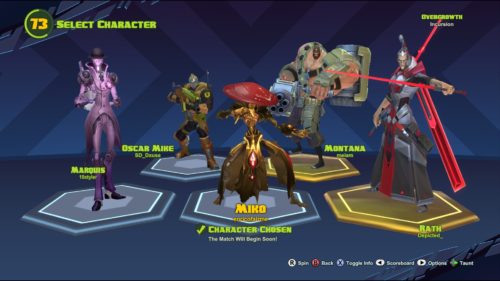 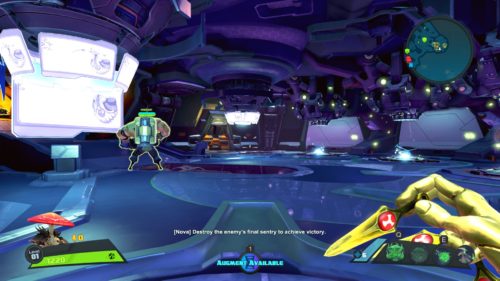 We wait for battle 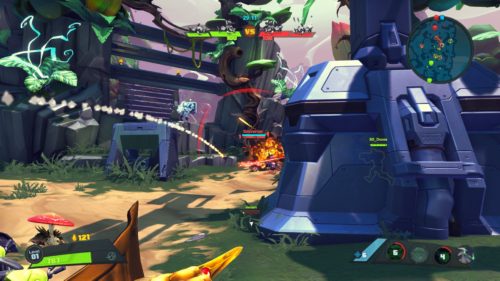 My first impression of PvP was that the content was a little thin. Now before I get completely destroyed for having a ‘haters’ mentality, at least allow me to defend my position. Three modes is an acceptable amount and is not the cause of complaint here. The complaint here is the fact each mode consists of only two maps. Given that the campaign boasts a total of 8, I feel like Gearbox could have at least pulled from some of the missions to add some meat to the multiplayer map selection. With that aside, each game mode is unique and fun to play and would really benefit from having more map options.

Having picked up Battleborn on PC, I have found the player pool to be rather small. Steam stats lists Battleborn as peaking at 9,138 players today (May 8th) and this is definitely felt in both the matchmaking queue times and level matching. Matches can take multiple minutes to queue and when they do it can often be seriously lopsided. I queued into a game where the level spread was from 3 – 35. Now I have read that level does not equal skill, however in a game where loot loadouts are created pre-match, higher levels give access to better items which gives a serious edge over those running low level loot. Gearbox has said they will address this imbalance some how, but with so few players on the PC, the risk of further decreasing the player base is high.

I also question the loadout approach Gearbox has chosen. At the surface level it seems to encourage getting best in slot pieces and running that. This completely removes the enjoyable aspect of MOBA gearing. Builds are simply static, not dynamic. A nice design would have been to keep the same three slot loadout idea, but have an in game vendor you can buy your own stash items from during a match. This would encourage more counter-building during matches. Instead I just ran whatever I felt like and it seemed to have a marginal effect. Gearbox wants players to spec down an uninteresting, two option tree (some mutations allow for three choices) for each champ instead.

Battleborn PvP does a good job of providing a bevy of things for the player to progress towards. Whether by levelling or completing certain challenges, players can access new characters, taunts, skins and name cards. This is great design by Gearbox, as players who enjoy the game will have plenty of reasons to continue playing and earning more unlocks.

The gameplay of Battleborn’s PvP had a few moments where it truly shined. I played a few matches, where everything clicked and the game was an absolute joy to play. Communication was flowing, people were synergizing well and the game was just fun. This is helped by how intuitive Gearbox has made the control scheme and one can see bleed over from Borderlands here. Matches can be fast and frenetic. Unfortunately these types of games came few and far between. Whether it was having team members leave or facing high level, premade teams, most of my time with the Battleborn PvP had me wishing to play a more balanced and flushed out MOBA.

Battleborn‘s PvP is really frustrating to me. I have seen moments where the game stands out as being fun and unique. However Gearbox seems to be unsure of what the true identity of the game is. I commend them for breaking from conventions in some instances, but am also left asking why certain huge conventions (vendor) are completely removed. The state of the game on PC is incredibly disheartening as there is some interesting things here. Unfortunately with so many games on the horizon, picking up Battleborn in it’s current state for PvP is not recommended.