What is Agents of Mayhem?

Developed by Deep Silver Volition, Agents of Mayhem is an open world, hero based, shooter with emphasis on character abilities. In Agents of Mayhem, players take control of a collection of 13 Agents who are tasked with protecting the planet from the evil Legion. While Agents will take part in missions across the globe (non – playable), the backdrop for this game is Seoul, Korea. Agents fight their way through Legion hordes in their attempt to stop the final villian, Dr. Babylon.

Gameplay is often the strong point of Deep Silver Volition games, so this will be where I spend the bulk of my review. While Agents of Mayhem has a wide array of gameplay to explore, much of Agents of Mayhem feels shallow and not all that interesting. 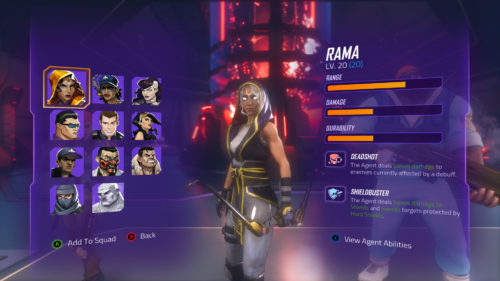 What differentiates Agents of Mayhem from Saints Row titles is the pivot towards hero based action. Instead of creating your own character, you choose from a roster of 13 Agents who each possess varying skills. Each Agent possess a unique weapon, a skill attack, and an ultimate ability. When entering the world or undertaking a mission, you choose a team of three Agents and then cycle through them on the fly (can only play one Agent at a time). Essentially the combat situation dictates which hero to use.

Overall I found the Heroes to be an interesting decision, but never really felt any depth to the mechanics. This is due to a few of key factors:

As the Hero element of Agents of Mayhem is the real differentiator between the game and other open world games, it disappointing to have this part of the game be so underwhelming. I would have liked to see Volition scale back the amount of heroes and really flush out the gameplay. Give me Agents that don’t use guns; make the ultimate abilities zany and unique; make combat utilize more strategic Hero synergies. 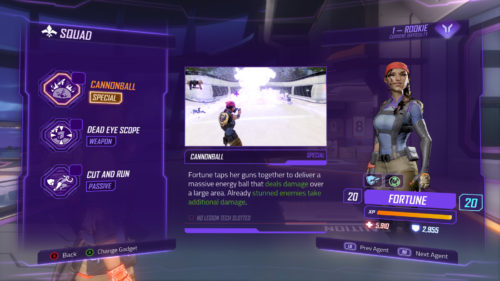 Like any Hero based game, heroes in Agents of Mayhem level up when they are used. Each Agent has 40 levels which essentially makes them stronger. Levelling an Agent boosts health and damage, and also unlocks new abilities. The new abilities usually hinge around the character’s playstyle, which is to say they don’t get all that interesting. Hardtack an Agent who throws a harpoon as an ability, unlocks different types of throws, for example. 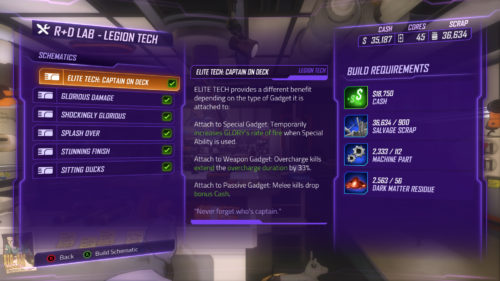 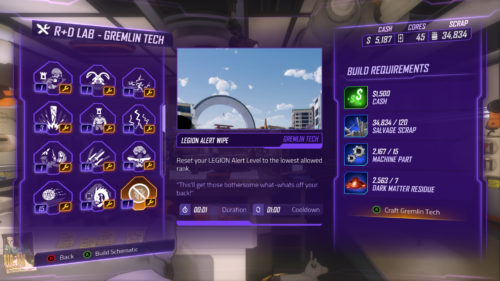 Further upgrades come in the form of Legion and Gremlin Tech which essentially act as consumables and ‘enchantments’. I never bothered really exploring these parts of Agents of Mayhem all that much as most heroes are already powerful, but for those nerds out there who really like to get deep into character building, there is a ton of tech to fiddle with. 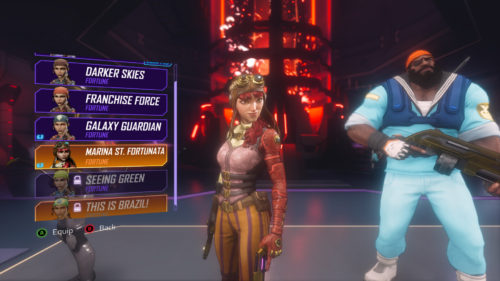 As this is a single – player centered experience, I was curious to see how they would deal with customization and unlocks. Overall, I think volition did an okay job, but I wasn’t blown away. The major customization in Agents of Mayhem comes in the form of unlockable skins. These skins can be applied to heroes, guns, and vehicles. Skins are found throughout the world, or by completing missions and tasks. None of the skins are all that interesting, but it is nice to have some visual changes.

I suspect that Volition will attempt to monetize this aspect of Agents of Mayhem and will be curious to see how that works out. It seems odd to sell skins to people in a single player only game, but maybe they’ll make that cash money. 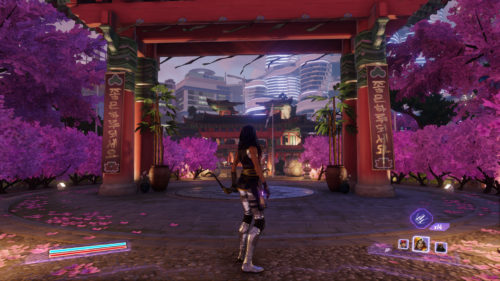 Volition is pitching Agents of Mayhem as an open world game and in some ways this is correct. Seoul is available for free roaming, with collectibles to find and missions and task to undertake. The problem with Volition’s open world is that Seoul is a fairly small and lifeless open world. You never really feel like the world is real. By the end of my playthrough, I simply dropped into the open world to access the next story mission. This is a similar complaint I had in Saints Row and is disappointing to see reappear here. 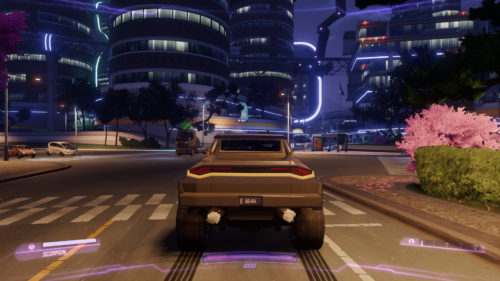 Traversing the open world takes the form of driving and parkour. Driving feels good and presents a bunch of old Saint Row cars to drive, which is pretty nice. Unlike Saints Row IV, your Agents mobility is scaled back quite a bit and actually requires routing your way to the top of buildings. This is due to the limited three jumps of each agent. I personally disliked this mechanic, but you may like it. 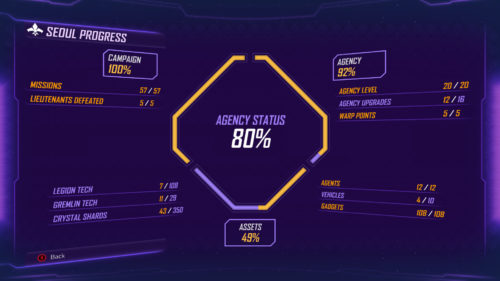 When you aren’t spending time completing missions throughout Seoul, you can return to the Ark which acts as a hub. Here you can take part in what is essentially a XCOM light experience. On the Ark you can research technology, send out agents to complete Global Missions, upgrade equipment, and unlock upgrades that will increase things like XP earned. This part of Agents of Mayhem is actually interesting, but doesn’t quite go as deep as I would like. I did wonder why Agents didn’t chill on the Ark like team members in Mass Effect do on the Normandy, but that may be asking too much. 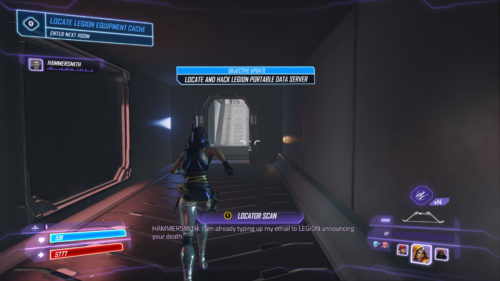 Get use to seeing this…

Possible the worst element of Agents of Mayhem is the Legion Lairs. Legion Lairs are hidden lairs throughout Seoul that are accessed by hacking random objects. While you may be saying, “oh that sounds fine”, the problem here is that Legion Lairs are bland and feel like they are attached to 90% of all missions. Seriously. You have an open world game and utilize so little of the open world? Legion Lairs were a huge turnoff to me and really seem like a misfire from Volition. Did they playtest this?

After gameplay, the second aspect of a Volition game that usually pulls players in, is the story and writing. I can easily say that Agents of Mayhem misses the mark on both. I’m not sure what it is, but the writing just seems off. Typically the Saints Row humor lands for me, but whatever is going on in Agents of Mayhem just doesn’t work. Characters feel wooden and deliver cringy lines of dialogue seemingly all the time. Couple the bad writing with a lack of interesting action set pieces and you have an incredibly hollow experience. While playing Agents of Mayhem, I kept waiting for that crazy action moment and it never came.

I will say I enjoyed the cartoon intros for each character and villain, but then I also enjoyed that same element in Battleborn…

Sound design in Agents of Mayhem is good but not memorable. The music seems generic and doesn’t really feature any hits. Overall though the sound is passable and probably one of the better aspects of the game.

+ Game is mind numbing, but can be good while doing something else (watching Twitch, etc).

+ Ran fairly well for me, but there have been reports of bad optimization on some systems.

– There are some bugs like invisible cars; falling through the world; guns not firing

The biggest problem with Agents of Mayhem is that it doesn’t do anything all that well. There is a lot of content here to playthrough, but none of it ever wows. The Hero gameplay, while an interesting change to the open world formula, is shallow and not that well done. Couple this gameplay with the complete miss on storyline and writing and you have a mediocre experience. If you were excited (like I was) to see what Volition would come up with, it’s hard not to be disappointed. Much of the game feels shallow and just generally not well thought out. I finished my playthrough of Agents of Mayhem with thoughts of Battleborn. My love of the studio led me to make the purchase, but the game itself is a far cry from the titles that made me a fan in the first place. You can avoid Agents of Mayhem and you won’t be missing much.

+ Game is perfect to play when doing something else

+ Stable: game was stable for me

+ Lots of stuff to do

– Lots of stuff to do, but may not want to

– Story and writing are just off to me

– Hero gameplay is fairly shallow and gets boring

Agree with my Agents of Mayhem review? Let me know in The Pit below.