A Way Out Review – The Journey of Two Gamers

Hazelight Studios newest indie title, A Way Out, is finally in the hands of gamers everywhere. A Way Out places emphasis on cooperative play and cinematic storytelling. Since the game emphasises cooperative play, I recruited FilmApe to help me on this review.

Does A Way Out provide an interesting cooperative experience, or were we left wanting A Way Out from playing? Here’s our A Way Out review.

What is A Way Out?

A Way Out is the second title out of indie studio Hazelight, which is a collection of designers behind the 2013 indie darling Brothers A Tale of Two Sons.  The game was announced during 2017 E3, and had been in development at Hazelight since the later half of 2014. Like Brothers, A Way Out attempts to introduce less traditional design elements to its gameplay including only cooperative play and splitscreen action sequences. A Way Out is currently available on PC, Xbox One, and PlayStation 4.

Basically, it’s like the QTE’s from The Last of Us or Uncharted made into an entire game. 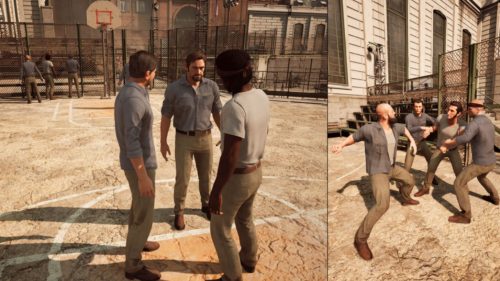 A Way Out is a 3rd person action-adventure game that tells the story of prisoners Vincent Moretti and Leo Caruso. These two characters create an unlikely partnership to take out a character named Harvey. This revenge tale is told using core gameplay mechanics of QTE’s along with forced cooperative play and cinematic storytelling. For the record I was Leo, while FilmApe played as Vincent.

I agree with Enrico’s description of the game and its mechanics, though I have to note that as soon as we heard that the main villain in the game was named Harvey, we referred to him from then on as Harvey Weinstein. 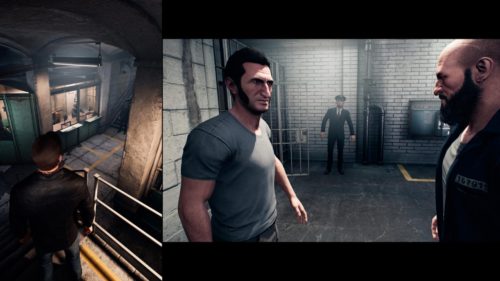 Cooperation is the biggest gameplay mechanic you will notice in A Way Out. The game is built around the concept of playing through the game with a friend or random online. If you want to play the game solo, there is no option to do so. This leads to an interesting game sharing scheme that both EA and Hazelight have implemented.

Since I’m a wealthy business owner (HTR brings in the cheddar), I bought the game for $39.99 CAD. FilmApe, being a poor ape, picked up the game’s Friend Pass, a free download which allowed him to play the game with me. This approach of sharing one purchase makes sense here, as I can’t imagine playing A Way Out would be all that fun with a random person.

Game sharing aside, A Way Out features a ton of cooperation mechanics. Almost everything you do will have some element of cooperation involved. These elements can be as small as handing a stolen chisel to the other player, moving crates or dumpsters together, to saving a character as he free falls through the air without a parachute. While these elements work for the most part, there’s nothing all that interesting about them. Yes it’s fun to work together, but most of the enjoyment in these mechanics came from the wisecracks in the voice channel, not the gameplay itself.

The fact the cooperation isn’t comes down mostly to the fact that the action itself is made up mainly of QTEs. These quick time events typically involve pressing a certain button when you are prompted to in order to execute an action. While this sort of gameplay was popular in the early 2000s, it feels kind of old here. This is especially the case when you have to repeat sections over and over again because the prompt was missing all together (cough* getting onto the airplane*cough).

While the game is mostly QTEs, there are a few instances where you will be playing a level that is designed around combat or chases. These levels don’t feel all that good and have somewhat clunky controls. I found combat to be especially weird in this as the aiming was overly sensitive and hard to use.

As Enrico mentioned, the majority of the fun to be had with this game, is simply playing with someone you know, and being able to have a chat while playing. Since there is so much focus on cooperation, you are bound to run into some hiccups, and hiccups we certainly ran into (all from my end).

Since I’m not a gamer (I’m FilmApe), my PC hadn’t been updated for some time. In fact, given that a did a full reset a few months back, my PC had reverted back to its original 2012 settings, meaning my graphic card drivers were way out of date. To make matters worse, my OS was out of date as well, so updating my drivers could only be done if I also updated my OS. While I figured this wouldn’t be a problem, given that I didn’t assume A Way Out would be that demanding of a game, I decided to just jump in with Enrico and see what happens. While the game had some clear graphical errors, it was playable, though I kept finding difficulties (as Enrico was keen to constantly point out) with some basic QTEs. There were times where I was bashing on my controller, trying to choke out a guard, and I just had no luck at all. I eventually switched to the keyboard, which was more successful, though still problematic.  Once we got to a driving mission (I had tried out two controlers, and keyboard by this point), which was next to impossible to complete, I figured it had to be something on my end, so I bid adieu to Enrico and set about updating my PC to a suitable state.

Unfortunately, while getting updated drivers did improve the look of the game, the driving mission, and the QTEs were still problematic. Given that I was playing on the guest pass, and since Enrico wasn’t, this led us to determine that there must be some lag/connection issue that can hinder the experience for the person playing via the guest pass. I haven’t found a good way to confirm definitely that this is the case, but I did have some instances where the audio cut out, which did appear to be due to the quality of the connection. In summation, in regards to game play, being the one on the guest pass made the QTEs, and especially the driving missions, very frustrating. 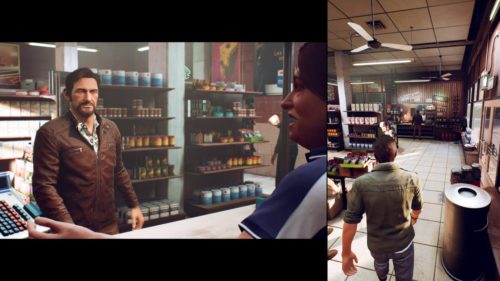 Another major component of A Way Out is the story it attempts to tell. You and your cooperative partner break out of prison and attempt to kill the villain named Harvey. Along the way you explore both characters family lives with some fairly lame chapters that include basketball and a hospital visit. At only 6 hours of playtime, the story feels incredibly rushed. There is never any attempt to make the characters likable or interesting. By the time the predictable ending rolls around, both FilmApe and I had had about enough of the game. This is a real shame as we both felt like creating our own characters with more emergent backstories, would really have helped our experience.  With such a heavy emphasis on creating a cinematic like narrative, A Way Out forgets it is still a videogame and creates a run of the mill experience that never landed with me.

A Way Out was being billed as a story-centric experience, so the story needs to be of a certain level. Unfortunately, the story here is forgettable, and uninteresting. There is a framing device with our characters sitting in an airplane talking, and this is cut back to throughout the game. While sitting in the airplane they will basically give a preview of what you are about to play in their banter. This entire bit should have been cut completely, and does nothing to drive the game forward. Furthermore, the game, like the majority of story-centric video games do, rips off movies ruthlessly. Much of the prison stuff is directly ripping off The Shawshank Redemption (and later Tango & Cash), right down to certain shots, and events. The most unforgivable rip-off is the scene in the game where Leo and Vincent get put on work duty tarring a roof. The only thing missing is them sitting around with a couple beers after the work is done, though I don’t think anyone would want to sit around with these characters.

Leo and Vincent are basically the same characters. They both have a wife and kid. They both are locked up in prison, and they both want to kill Harvey (Weinstein). The only real departure between them is that Leo is the wild card and Vincent is supposed to be more stoic. If we are supposed to connect with these characters (and the ending implies that we are supposed to), it just doesn’t work. The dialogue is your standard video game dialogue, heavy with cuss words and that’s about it. There is never a single point where I felt attached with these characters, and having the option to customize them, in regards to their look and personality, would have gone a long way. The entire experience just makes it seem like the developers want to be filmmakers.

Thoughts on our A Way Out review? Let us know in The Pit below.