Since it has been the holiday season, I’ve spent much of my time away from my main gaming setup. Due to this separation, I’ve been spending a tone of time playing mobile game, Arena of Valor. Arena of Valor brings MOBA action to your handheld device and features everything players of MOBAs love and hate. If you’re diving in for the first time this list of  5 beginner friendly heroes in Arena of Valor will help you take to the battlefield with ease. 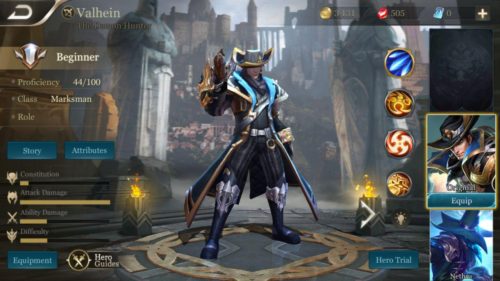 Valhein is a beginner friendly Marksman who is capable of dealing a tremendous amount of damage.

If you’re a fan of dealing damage, Valhein is the champ for you. Occupying the Marksman class, Valhein utilises range in order to deal massive amounts of attack damage. While playing as Valhein, you will want to keep a safe distance from the enemy opponents, as he is relatively squishy (easily killable). Utilize Valhein’s passive Hunter buff to retreat from damage quickly, or to pursue enemies.

Pocket Glaive (Passive) – Every third random attack becomes a glaive with and additional random effect and grants 1 stack of Hunter buff, which increases 10% movement speed for 2 seconds and stacks up to 5 times.

Bloody Hunt – Valhein throws a red glaive, dealing 190 (+153) (+0) magic damage to the target and enemies nearby. Grants 1 stack of the Hunter buff. 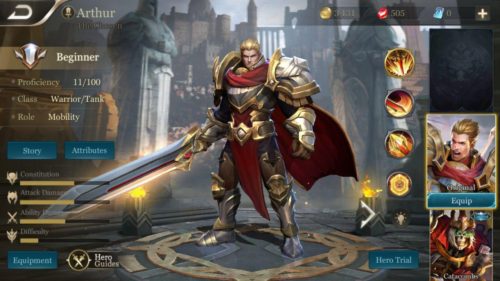 Arthur is a good beginner tank as he possess inherent tankiness while staying mobile.

If you’ve played Tencent’s other MOBA property League of Legends, you will immediately recognise the character of *Cough* Garen *Cough*, I mean Arthur. Created around the idea of mobility and tankiness, Arthur is able to hit and run while also taking a large amount of damage. Arthur’s passive of Paragon grants bonus armor which scales as you level up, meaning he can become rather tanky quite quickly. As a tank you will want to either peel for your damage dealers (keep people off them), or jump the enemies back line to pressure their damage dealers. Given Arthur’s mobility, he is quite good at doing the latter.

Paragon (Passive) – Arthur is blessed by the heavens and gains 28 armor (scales with hero level).

Righteous Fervor – Arthur powers up, raising his movement speed by 30%. During his next normal attack, Arthur leaps at his target, dealing 180 (+164) physical damage and slowing their movement speed by 90% for 1 second. The target damaged by this ability will be marked for 5 seconds. Marked enemies will suffer additional damage from Arthur’s normal attacks and abilities equal to 1% of their maximum HP as magic damage. This ability also raises the movement speed of nearby ally heroes for 5 seconds.

Deep Impact (Ultimate) – Arthur jumps up high and crashes towards an enemy hero, dealing 750 (+213) physical damage and knocks surrounding enemies into the air for 0.5 seconds. Enemies caught in the blast radius suffer 100 (+57) physical damage every second for 5 seconds. 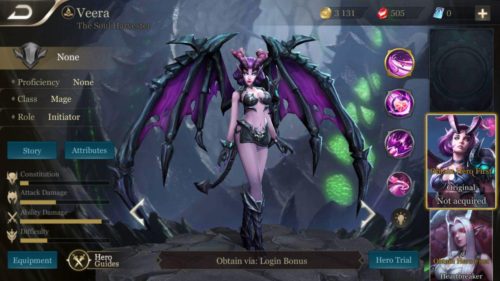 Veera is capable of dealing a tremendous amount of magic damage.

As a mage, Veera is responsible for dealing magic damage to the enemy team. Like the Marksman class, mages are typically rather squishy and require keeping a safe distance in team fights. Veera is a pretty simple and straightforward hero to play, but she is capable of delivering massive amounts of magic damage when played well. Couple her ability to deal insane damage with her passive, Come Hither, and you have a recipe for dominance.

Come Hither (Passive) – Veera applies a Come Hither stack to every enemy hit by her abilities. Each stack reduces an enemy’s defense by 30-72 (scales with hero level), up to 3 stacks.

Mesmerize – Veera blows a kiss at an enemy, dealing 285 (+0) magic damage and stunning the target for 1.5 seconds.

Inferno Bats (Ultimate) – Veera summons up to 5 bats to attack surrounding enemies. Each bat deals 325 (+0) magic damage. If a target has been hit once, all subsequent hits only deal 50% damage. 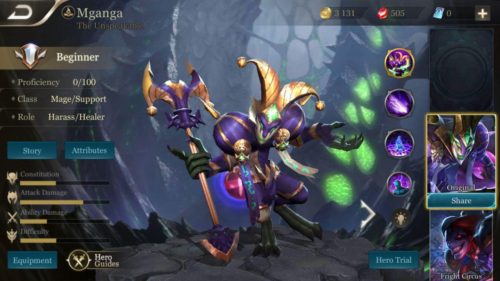 Occupying a middle ground between full Support and full Mage is the hero Mganga. Why Mganga made this list is due to his ability to both support the team (through healing) while also dealing a nice amount of damage. Mganga is somewhat slow and squishy, so keep that in mind when engaging in fights. You will also want to stick close to either the Marksman or Mage on your team in order to fully utilise Mganga’s mix of support abilities.

*Mganga’s stack ability is visualised by the number over the head of the hero or enemy it hits.

Toxic – Mganga creates a poisonous cloud at the target area that slowly spreads and deals 40 (+0) magic damage for 4 seconds and slows enemy movement speed by 30% for 2 seconds.

Fortunate Gift – Mgangs hurls magic items in the specified direction to cause 90 (+0) magic damage to any enemy he hits. However, if he hits an ally hero, he will affix a healing mark on them that will recover HP.

Detonation (Ultimate) – Mganga sets off explosions that deal 140 (+0) magic damage to all nearby enemies and heal ally heroes by 120 (+0) HP. The explosion effects are increased by 50% per stack for marked ally heroes and enemies. 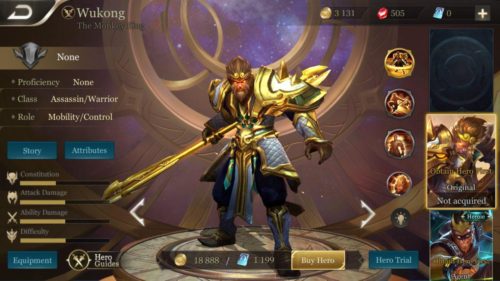 Wukong is a hard hitting Assassin who works best in quick engage situations.

Unlike the rest of the heroes I have listed, the Assassin class of hero is rather hard to play in general. Since I wanted to provide one hero from each class, I decided to include the Assassin class as well, but just beware of the positions difficulty.

Wukong is a character from League of Legends that has made his way over to Arena of Valor. As an Assassin, he excels at mobility and quick attacks against the enemy team. Utilise his Shadow Clone ability to go invisible to either escape if you over extend, or to ambush. From a purely statistical perspective, Wukong is incrediblly well rounded and flexible.

Monkey Business (Ultimate) – Wukong unleashes his inner Chi, knocking nearby enemies into the air, dealing 150 (+83) physical damage and stunning them for 1 second.

With a total of 40 playable heroes, Arena of Valor has a wide range of skill levels for all players. If you are just starting out, take a look at the characters mentioned above in order to learn a bit more about how MOBAs work. Once you have a good grasp on mechanics, move onto more difficult, but also more rewarding champions.

Who would you add to this 5 beginner friendly heroes in Arena of Valor list? What heroes are interesting to you? Let me know in The Pit below.