Everyone else is dead, and you’re the only one left. You slowly open the cabin door, as the sun rises after a night of terror. You take a few steps forwards, the keys to the van in your hand. All of a sudden, the top five horror films of the 80s appear out of nowhere, for your reading pleasure. If you want to hear the whole story, check out parts one, two, three, and four.
Advertisement

“After a decade of silence… The buzzz is back!”

The much maligned Halloween 3 has been getting its due in recent years, and rightly so. This movie is Halloween, the holiday, captured in cinematic form. It is creepy, it is goofy, it is fun, it’s everything that I could want from a movie about Halloween masks that kill. Dean Cundy’s cinematography is gorgeous. John Carpenter’s score is the best he’s ever done (which is certainly saying something). Tommy Lee Wallace gives a 110% to the film, and if there ever was a man that needs no introduction, it is Tom Atkins. I liked this movie quite a bit when I first saw it how ever many years ago, and I absolutely love it now.
Most 80s Moment
Killer robot doppelganger
Halloween 3 Theme
#3 – Prince of Darkness (1987)
“Before man walked the earth…it slept for centuries. It is evil. It is real. It is awakening.” 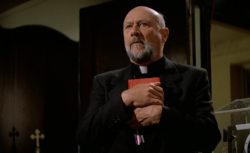 There’s a poster for this on my desk, and very day I thank JC for the cinematic gifts that he has given us. I feel like it’s JC doing a best of for his career up until this point, with things here and there throughout the film that hint at his earlier work. The stakes in the film are huge, but the setting is small, which makes every action in the film meaningful. JC blends science and religion in an interesting way, and the conclusion that neither will save us is about as scary as you can get.
Advertisement
Most 80s Moment
This racist joke
Prince of Darkness Theme
#2 – The Shining (1980)
“Stanley Kubrick’s epic nightmare of horror”

So, The Shining is, well it’s pretty good. 4hat can be written about it, that hasn’t been written before. My only somewhat unique position on the film is regarding Shelly Duvall’s performance. Her performance is out of this world good. It’s genuinely difficulty to play a sincerely innocent character, but Duvall pulls it off. As a character she does nothing wrong, and she’s clearly pure of heart, which makes all the horrible stuff that happens to her that much worse.
Advertisement
Most 80s Moment
Peanut butter, crackers, peanuts, and Oreos
Song Used In The Shining
#1 – The Thing (1982)
“Man is The Warmest Place to Hide.”

It’s the obvious choice, but there can be no other. JC is the king of the 80s, and him owning 4 (4 1/2) out of the 25 spots makes him the king forever. The Thing has everything. Its got great characters, and performances. Its got atmosphere enough for twenty other films. Its got a slow burn that simmers things in a way that tantalizes all my sweet spots. The Thing delivers no matter how many times you re-watch it. In one hundred years, it’s going to be hard to know what films from the 80s will really resonant with the future people. Given that I won’t be around in one hundred years, I’m willing to bet any money that The Thing will be a film still viewed, in order to understand the horror films, neigh the films, of the 80s
Most 80s Moment
Chess Wizard
Theme From The Thing

So there it is, The 25 Best Horror Films of the 1980s. I’m sure that there is something for everyone here, and if you aren’t bust watching Stranger Things Season 2 this weekend, why not check one (or some) of them out.