“The seven dreaded gateways to hell are concealed in seven cursed places… And from the day the gates of hell are opened, the dead will walk the earth.” 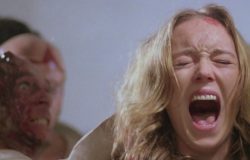 Lucio Fulci’s magnum opus operates in the land of dream logic, so this film is certainly not for everyone. For those that it is for though, this flick is going to rock-n-roll you in a big way. The vibes of the film are killer. The music in the film is killer. The kills in the film are…uh…killer. The Beyond is definitely Fulci’s best film, and there are so many memorable moments in it, that it demands multiple viewings.

Information about evil contained in a book

Angst is a psychopath procedural film that will make you want to take a shower after watching it. The film is quite disturbing, but is also surprisingly restrained, with only one really brutal sequence in the film (though it is really brutal). Angst has had a hard life, with it never getting a proper release, and it being filmmaker Gerald Kargl’s only directorial credit. The film is getting a new life now though, after its proper home video release courtesy of Cult Epics. One small paragraph does not do the film justice, so just trust me that you’ve never seen a film quite like this. The cinematography alone makes this required viewing.

Two ladies at the diner.

“There’s more than one way to lose your heart…”

I don’t consider any of the horror films listed higher than this to be slasher films, so that makes it the best slasher film of the 80s. Starting off with a bang, or whatever noise a pick-axe through the chest makes, My Bloody Valentine is an extremely enjoyable small town slasher flick. The theatrical version of the film is good, but you really haven’t seen it until you’ve seen the unedited cut. You get to see kills that are truly worthy of a killer like Harry Warden, and that’s important. The movie features a compelling legend, a great set-up for people to get picked off one by one, and a very strong third act. When it comes to slasher films in the 80s, it doesn’t get better than this.

Body in the laundromat

The Ballad Of Harry Warden

For George Romero, the world ended in the 80s. We might have lost our humanity at the end of the 60s, and then fell victim to consumerism in the 70s, but it was in the 80s when all hope was truly lost. Day of the Dead is a bunch of people holding onto the living world for no reason other than that’s just what you are supposed to do. This is a bleak film, suggesting the end of humanity, and the rise of something else. This is also a film with some of the best practical gore effects ever put in a film. It’s not even like “oh, the effects still hold up today”. No, it’s ” these effects are better than anything we see today”.

Day Of The Dead Theme

“Lock your doors. Bolt your windows. There’s something in The Fog!”

JC’s feature film follow-up to Halloween is a grab bag of horror ideas, with its main focus being telling a great ghost story. The key word here is atmosphere, and this flick has got atmosphere in spades. Even though the town of Antonio Bay is terrorized by killer leper pirate ghosts, I still want to live there more than anything else in the world.

It’s 11:55, just five more minutes till midnight. Time enough for one more list, one more list to keep us warm. Tune in tomorrow for the grand finale.