Part 3s are generally pretty good when it comes to horror movies, so let’s just jump right into #15 to #11 and hope that we can capture some of that magic counting down The 25 Best Horror Films of the 1980s. Be sure to check out Part One and Part Two to make sure you are up to date on all the fun.

“Scream now, while you can still breathe.”

Talk about a powerhouse team up for this one. You’ve got Chuck Russell directing the film, and then co-writing it with Frank Darabont. The script here very cleverly dissects the well tread plot of the original film (so many films in the 80s ripped off the original’s plot), and cleverly subverts a lot of genre cliches, making this flick feel very fresh for the late 80s. I think that a strong case could be made regarding why this film should be a staple in any screenwriting class.

Every scene that this kid is in.

“Out on the desert highway, the rule of thumb has a different meaning…” 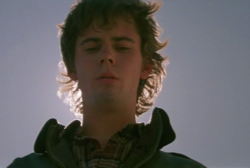 I truly didn’t care for this film when I first saw it, but when I re-watched it again just this year, I had no idea why I didn’t love the film on a first viewing. Straight up, The Hitcher rocks (and is in desperate need of a release on Blu). The plot of this film really plays on the fear of stranger danger, and I feel like this fear of other people has only increased since The Hitcher first thumbed for a ride. 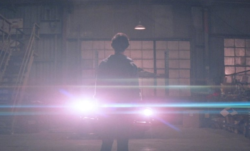 JC’s first appearance on the list, and it’s with an adaptation of SK’s work. Christine has a perfectly timeless feel, and is able to pay tribute to another era (the 50s), without having to be set in that time period. The drive-in scene in the rain is a favourite of mine, as is Christine the car in general. She’s possibly my dream car… 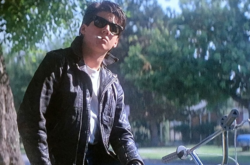 Another example of an 80s powerhouse team here, with Fred Dekker directing, and Shane Black writing. What more can really be written about this film, other than its better than The Goonies, and is infinitely watchable. This flick has a lot of love out there for it, but given our current 80s craze, I’m seeing nowhere near enough “Stephen King Rules” shirts out in the wild.

Song Used in The Monster Squad

“From a dimension beyond the living, a terror to scare you to death.” 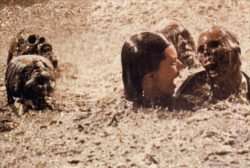 Do you want an 80s horror double feature that won’t quit? Just couple Poltergeist with The Monster Squad, and you’ve got a great night ahead of you (The Monster Squad being the first in the double bill, obviously). Steven Spielberg…I mean Tobe Hooper basically just re-skins E.T. and then adds the horror of the unknown in with the wonder of the unknown, to make things adequately spooky.

Grown men cat calling a teenager with her Mom watching.

Tell me that you at least listened to Carol Anne’s theme. Jerry Goldsmith is crazy for that one. Let’s talk horror movie scores in The Pit below. Be here tomorrow for #10 to #6.