It is almost Halloween, and there is a certain 80s set television show that is premiering its second season on Friday (Oct 27th), so clearly we need to talk about 1980s horror films. As much as the 80s nostalgia wave might be completely annoying, and getting to the point of aggravation, there is a reason why it is such a revered time period. In regards to pop culture, it does not get much better than the 80s. You had a lot of film makers who cut their teeth in the dirty 70s being given the opportunity to work with a larger budget, and because of their earlier accomplishments, having free reign with that budget. There were also a lot of film makers who grew up watching the films of the 50s and 60s, getting the chance to pay homage to those films that they loved. It is really kind of like that now-a-days, with so many 80s influenced film makers doing their thing in modern times, though instead of crafting their influences into new hot things, they are just trying to recreate exactly what they loved. So, let us dig into the best Horror films of the 80s, and see what we are trying so hard in 2017 to emulate.

“If you love being scared, it’ll be the night of your life.” 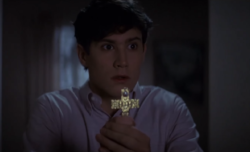 Fright Night begins the list with its strong mixture of classic monster movie ideas, and 80s sensibilities. The characters, and the “sexiness” of Jerry the vampire is all very 80s, but the plot and the reliance on old timer Peter Vincent to fight Jerry, is very classic monster movie. This has a strong mixture of humor and genuine spooks, and it certainly feels right to begin the list with this film.

Gonna have to go with the club scene/dance seduction, for obvious reasons.

“You Won’t Want To Know What It Means.” 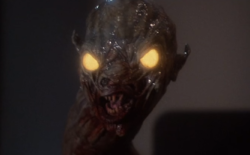 C.H.U.D. blends the goofiness of the 80s, with a social conscience, and it works. It is a conspiracy cover up movie first and a horror movie second. The mystery of figuring out why people are disappearing is engaging through the entire film, and 80s paranoia is rampant in the movie.

Daniel Stern being real with some corporate fat cats. 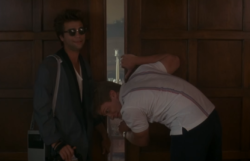 April Fool’s Day is full of a ton of 80s stereotypical characters. It treads the line between self awareness and goofiness. And, best of all, it is super fun. April Fool’s Day captures the harmless fun of Halloween better than just about any film I can think of. Because of the film’s ending, it gets dismissed too easily by most people. I’d say everyone involved in making the film knew what they were doing when they were making it, and if you can get on board with the movie, than you’re going to have a good time.

Literally every scene of the film.

“Seduction. Romance. Murder. The things one does for love.” 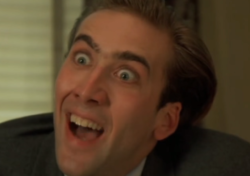 This is the American Psycho of the 80s, and it’s a unforgiving take down of the prevalent yuppie culture of the time it was made. Nicolas Cage is absolutely perfect in the movie, and the entire movie is a canvas for him to go nuts on. Never do I feel like Cage’s over acting is not in service of the film’s tone, and the character that he is playing. Again, this flick gets dismissed because of how ridiculous Cage gets in the film, but that is completely the point. If you are watching this film and laughing at it, the joke is actually on you. This film knows what it is, and has the courage to ramp things up to 11 completely on purpose.

Yuppie scum being terrible towards other people.

“The good news is your dates are here. The bad news is… they’re dead.” 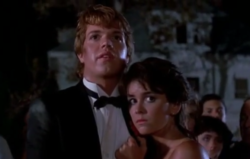 This is not the only showing from Fred Dekker on the list, and while his luck in the 80s doesn’t allow me to call him the king of 80s horror (that honour goes to a certain JC), Dekker is certainly the martyr of 80s horror. Much like Fright Night, Night of the Creeps is blending classic horror and 80s sensibilities, but this movie takes things even further. This is not a grab bag of horror ideas, it is a grab bag of horror ideas being dumped into a blender, and made into a completely delicious smoothie. You get all the best cliches, both old and new ones, thrown right into your face, and add in a liberal helping of humour, and you got a great 80s stew going.

Some friendly E.T.s in their space ship.

A Song Used in Night of the Creeps